What is Driving This Market?

I wish I could say it was a strong economy-- or strong earnings-- but I can’t.  Those who made our Solution Series last week in the Denver office got a chance to see and understand what’s really driving the US financial markets now.  We are finalizing the video edits to that presentation now and will deliver it to you all shortly.  But for this update, I’ll provide a sneak peek into this issue as it seemed to be the most captivating subject.

Let’s start with this simple fact.   Prices of stocks have a long history of moving in sync with the trend of corporate profits.  Despite that being the case, there are lengthy periods of time, when the two worlds become untethered.  This is one of those times.  Stock prices have been moving higher (albeit erratically) since 2016 without a commensurate rise in earnings.  We can forgive a quarter or two of such behavior, but nearly 4 years ….? 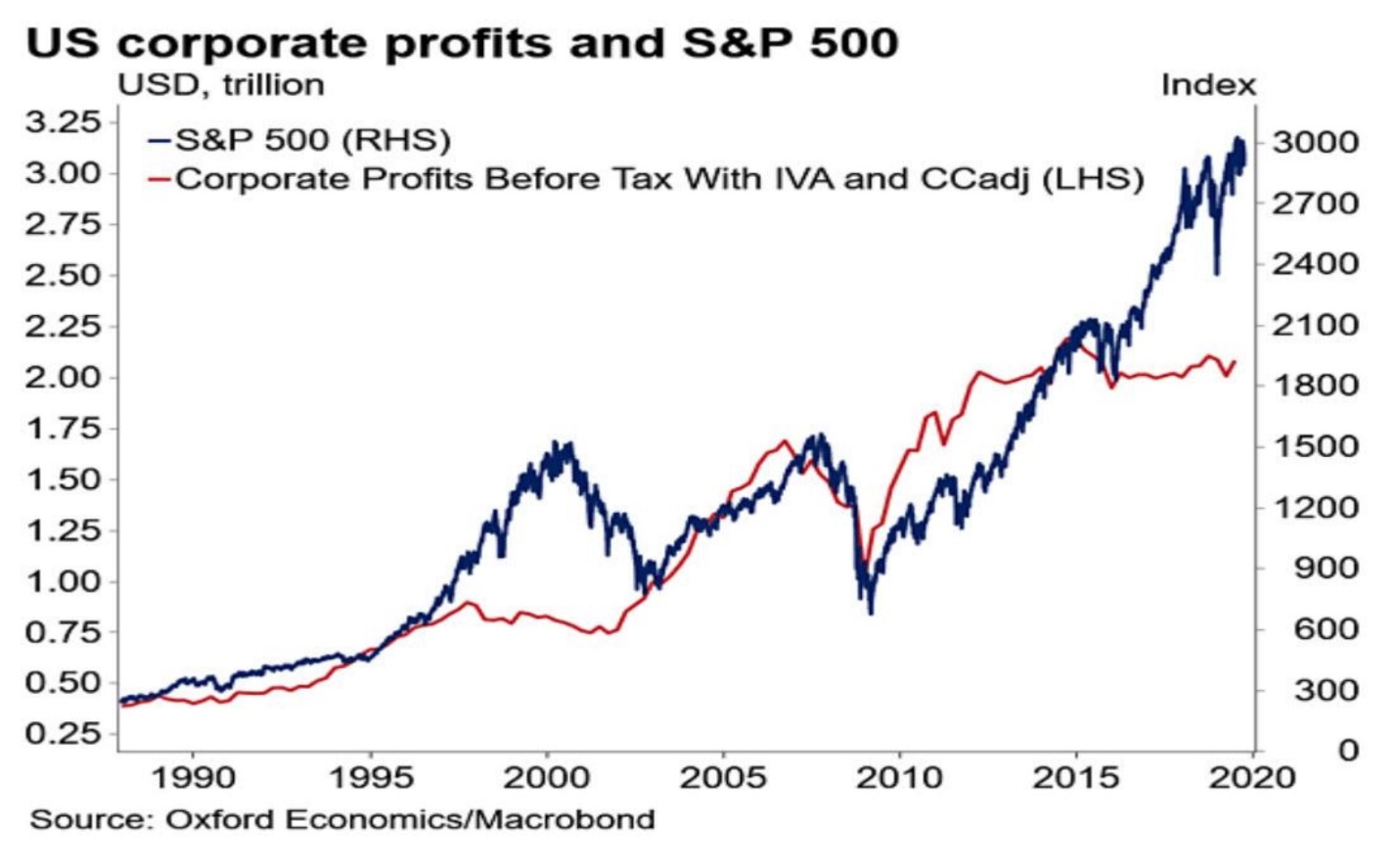 Now the keen market guru will notice several things from the chart above.  First, we notice the enormous current gap between the blue line (S&P 500 price index) versus the Red line which represents aggregate corporate profits (aka real operating earnings). You might also notice that in the last 30 years, this has happened before, and lasted for nearly 5 years.   It occurred during the run up in stocks from 1995-2000.  The year 2000 proved to be the final top of an 18-year long bull market and for the next three years, prices fell BACK down toward the red corporate profits line.   Today’s market feels, looks and is empirically in the same situation.  In fact, one could argue that corporate profits have really been very flat since 2012.  Stocks prices then were undervalued relative to profits, now they are extremely overvalued according to that scale.  We can only surmise two outcomes to the current situation.  Prices will work their way back to profits over the course of the next several years, or profits will rocket higher with prices staying steady. To our eye the former seems far more likely than the latter, unfortunately.

It’s Not the Economy (stupid)

The Recession Watch Dashboard below, provided by Guggenheim, was also an eye opener.  For as much as certain people would like to justify stock market gains in recent years to the strength in the economy, we are clearly still on the path to recession that would formally present itself in the next 6-12 months.  The bond market is confirming a recession is not far away.  If not for the Fed sitting on short term rates like the 800lb gorilla that it is, we would likely see short term rates far above long term rates – a condition that undeniably leads to recession.  Will the Fed get off the scale?  Not while Trump is still in office.  Here’s a snapshot of the “dashboard”.  The blue lines are historical patterns in pre-recessionary environments.  The purple lines are the current conditions of all variables shown.   We’re obviously tracking very closely with historical precedents 6-9 months prior to a recession. 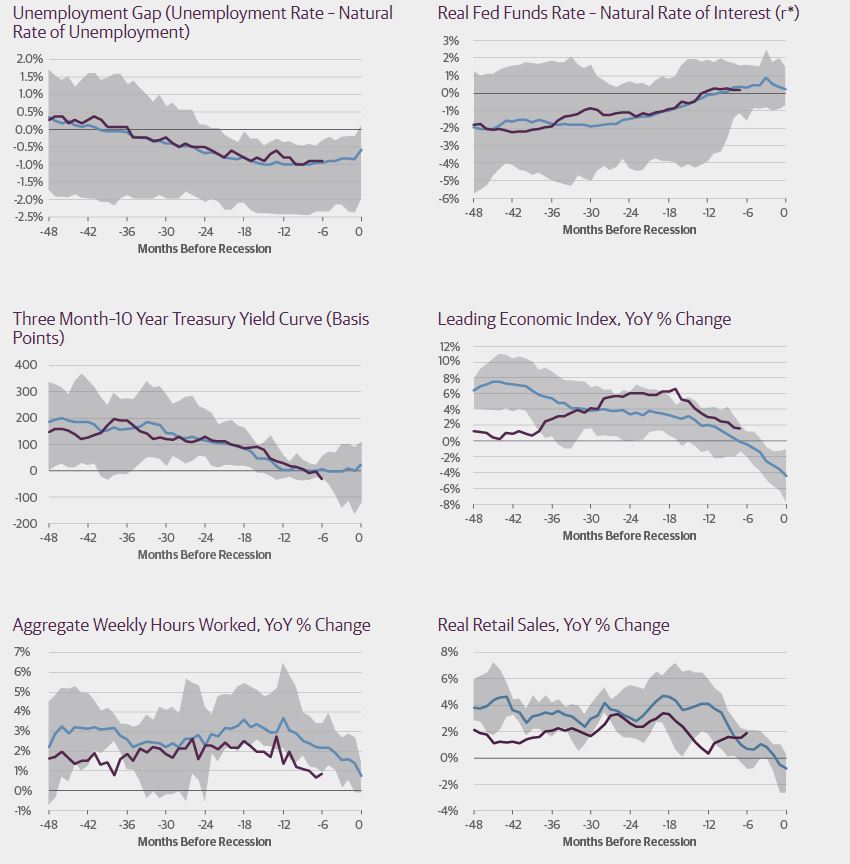 But It Is Financial Engineering!

Stocks are going higher (without the economy and without a rise in corporate profits) for one very large and very simple reason-- financial engineering.  In plain-speak, this means prices are going up on the back of temporary and non-fundamental based drivers.    I’ll explain some of these factors in very basic terms.

Share Buybacks – There are things like corporate share buybacks, where a company decides to use borrowed money to buy back their own shares. If you think about it, companies are effectively reducing the supply of available stock that the public can purchase.  When a company is buying back its own shares, there are fewer outstanding shares to buy, right? Just like anything in economics, lower supply leads to higher prices—all else equal. Voila! 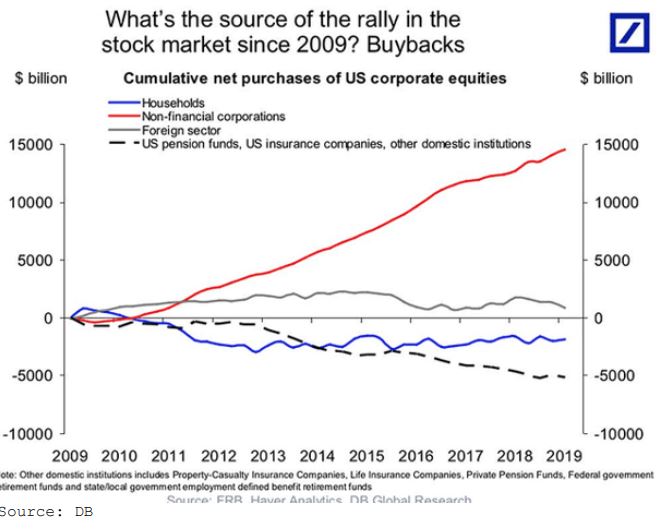 Low Interest Rates– Companies have embarked on share buybacks in the past, but often in the final years of an aging bull market when board members can’t remember the days when their own company shares were down and out.  Just like all investors, corporations tend to buy back their own shares at highs and in fact, they tend to issue more shares to the public at lows (effectively selling low).  The Federal Reserve and central banks around the world have artificially made money cheap to borrow with rates at nearly zero or even negative rates (I’ll pay you to lend you money!).  The Fed’s easy money policy has been the fuel for driving share buybacks.

Momentum – When prices go up, investors chase returns.  Take a look at the share price of Tesla (TSLA), if you need an example.   Higher prices lead to even higher prices.  Today, with the popularity of index funds and ETFs, every dollar that goes into the market, is piling into the same few stocks that dominate those indexes.  And, these again, are the very same companies doing the largest amount of share buybacks.   This is the momentum trade of the decade with free money enabling share buybacks, driving investors into indexes, and ultimately, leading to more price appreciation from the same companies.  Momentum based stock markets are fun…. While they last… and then they are not fun…. At all.

The point of this entire update is to call out a few realities in today’s market, to provide some context and background.  Investors need to understand the risks they are taking by blindly owning a pool of stock indexes with a loose pinky promise to buy and hold.  Our Solution Series Investment Forecast showed clearly that there are some enormous understated and structurally problematic issues with today’s stock market.  We can’t and won’t say when it all ends as much as point to the obvious accumulation of categorical and unsustainable problems.

Again, we must reiterate that this is a critical time for all investors to make sure they have a risk mitigation system firmly in place.  Market declines are not events to be feared if an investor has a process and knows where they are going when times get tough.  This is what we do for our clients.

PS:  Our deepest condolences to Kris Dickey’s entire family.   Kris lost her mother over the weekend and will be out of the office this week.  Please allow us a little more time to serve you in her absence.  Thank you.