We are going to break our rules a bit with this update and do some forecasting as we head toward the end of the decade.  We’ll highlight some good evidence suggesting that the winners of the last decade (or two) are not likely to be the winners of the next decade.  60/ 40 investors should read this carefully as there are some dire looking outcomes for this widely held stock/ bond blend.  Today, we are seeing the potential next generation of leadership in sectors and asset classes develop.  As we cross into the next decade, it may be just that time.

Sean Powers, our Managing Director sent these charts to me this week.  They are worth your time.  This chart showing the top ten holdings among different generations was created recently by Schwab who looked through some absurd number of portfolios by age to come up with these findings.  Their message was directed in a different direction pointing to the fact that Millennials own the same things compared to Gen X or the “Ok Boomer” Generation.  There are obviously a few differences but not many.  This survey was done considering individual stock holdings only, not complete portfolios which include index funds and ETFs to be clear.

I found this shocking not because one generation owned the same things as another but rather than all three generations owned a very similar list of top ten names.  Clearly these have been the big winners of the last decade since the market bottomed in 2009, ten years ago.  Did everyone have the foresight to know these would be the winners a decade later?  Did they all buy in 2009 at the lows?  Of course not.  Most investors chase returns in a wild frenzy of bad behavior, meaning they probably bought these names in the last 12-24 months because the past returns of these same names were so large (most cases).  Note- Alibaba (BABA) only went public in 2014.  Millennials were still in their teens in 2009.  Anyway, for a variety of reasons, this list of top ten has become the consensus portfolio.  Now let’s look at past periods where EVERYONE owns the same set of securities.  I’ve been managing money long enough to have witnessed each of these personally. 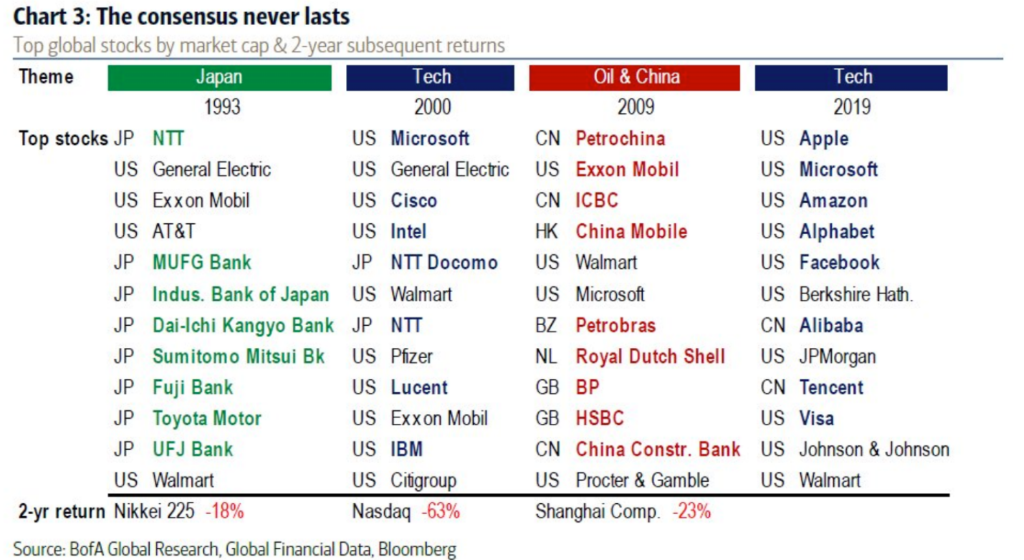 This chart of consensus holdings was provided by B of A Global Research, not Schwab, further validating that everyone does indeed own the same top ten list of stocks now.  At the bottom of the chart, you can see that future returns for Benchmarks, closely connected to these portfolios, have not been very good on a 2 year look forward.  I’ve said many times in the last year that the current market has many similarities to the year 2000 in terms of concentrated Technology names dominating the markets.  Indeed, Microsoft is again on the list today as it was in 2000.

The pattern of these top ten consensus stock lists losing substantially and not recovering for years is well worn.  Again, this occurs when everyone piles into the same names as they are doing now.  Strangely, the turn in fortunes seems to coincide with a new decade.  Tick Tock

Here’s a little more shameless forecasting.  I ran the average annual performance numbers for stocks, bonds and commodities, over the last 20 years to date, using the S&P 500, Pimco Total Return bond fund and the Commodities CRB total return index relatively as proxies.  These numbers include all income and dividends on a total return basis.

Here’s my shameless forecast for the next decade, while being as unspecific as possible.  Stocks will not earn anything close to 6%, probably closer to 3-4%.  Bond total returns will taper to 2-3% and commodities will generate high single digit returns 7-9%.  These are wildly different returns than you see above or of those generated historically.  Investors don’t own much in the way of commodities.  In fact, ownership of commodities is at an historical low speaking of consensus.   Expected returns for stocks and bonds are now lower in the next decade than they have been in the past.

Meanwhile, today, we are seeing pieces of the commodities complex like Gold and Silver starting new bull markets (+17% average returns for the last two years).  They are the early warning indicators that inflation is coming.  Now energy looks to be putting on a bottom and energy represents over 50% of the commodities index world.  No one would be so foolish as to own energy, oil , gas or energy services right?  We bought all this week. Industrial metals like copper have started new long term uptrends.  We took a few positions in base metals this week. Agriculture and soft commodities are not yet in gear but looking constructive.

Meanwhile, stocks and bonds are tired, tired, tired.  Investors owning the classic 60% stock/ 40% bond portfolio might do some math.  Your portfolio in aggregate is not likely to make 4%, probably closer to 3% and it will take a lot of Ant-acid to earn it.

In short, we believe investors should be prepared to think and act unconventionally as we move into the next decade.  Yesterdays winners could easily become tomorrows losers on a long term basis, same for asset class returns.

As a reminder for all our clients and regular readers, we like to reiterate WHY we do what we do.  Why do we manage risk?  Why do seek stable compounding returns rather than higher volatility return streams? Why do we look for unconventional places to invest and avoid consensus portfolios?

The answer is that Life is Short!

Very few investors have the time or financial anchoring to lose great portions of your net worth in a bear market and wait for years just to get back to even.  Compounded positive returns in all markets should be every investors’ singular goal because there is nothing that beats that.  Buffett understands this basic principle and he is the best that ever lived. Life is Short, don’t blow it by chasing yesterday’s winners.

There will be more rubbing of the crystal in the near future.  Stay tuned