Three Lies and a Truth

As a spin on the summertime car game of three truths and a lie, we’re going to work through a few realities regarding recent history of Federal Reserve monetary policy, the timing of rate cuts and the impact on the financial markets.  This will be more fun and educational than it sounds.  Game on!

Three Lies and a Truth

We’ll format this game by posing a statement and then reveal the answer as True or False, with an explanation.  Most of the questions are those you have heard recently in light of all the chatter about the Federal Reserve and when (or if) they will cut interest rates.

Statement – By cutting interest rates, the Federal Reserve will help to avoid an economic recession and any potential stock market correction (or bear market).

Let’s look at the last 30 years of rate cuts after a series of rate hikes to see what happened.   First let’s look at the US economy.    Once the Federal Reserve starts cutting rates, we have seen the US enter a recession in all but two cases (1995 and 1998).  Rate cuts are by nature a sign of capitulation by the Federal Reserve that conditions are weak enough to justify monetary stimulus.  Today the market seems to think there is enough evidence of weakness in the economy to support a rate cut at the next meeting in July (80% probability).  The market is a pretty good predictive tool but doesn’t always get it right.  The stock market has had some split results following the first round of rate cuts.  Since the year, 2000, we have seen two generational bear markets unfold that started coincidentally with the first-rate cuts.  Before year 2000, the results were mixed but the markets generally navigated mild economic recessions without too much damage.  This chart from Bespoke is a little tough to read and doesn’t paint the whole picture.  But there are some critical things to highlight from this information.

First, note the “Start Rate %” in the 4th column of each of the last cycles when the Federal Reserve started cutting rates.  In all cases including the last cycle starting in 2007, the Fed began cutting rates from much higher levels (5.25-9.75%).  Think of rates as ammunition to fight recessions.  Today, the Fed Funds rate is 2.5%.  We don’t have a lot of ammo to fight the next recession obviously.

Next, note the market losses following the last two rate cut cycles beginning in 2001 and 2007.  One year later, stocks are down double digits.   What the chart doesn’t show is that stocks ultimately fell 48-50% both times over a period of 24 months.   Needless to say, rate cuts in the last two cycles were highly reactive to the market meltdowns.  Did those rate cuts all the way to ZERO help?  Not really.  The US economy still fell into deep recession lasting years and the markets were obliterated both times.  Maybe this time will be different but with rates starting at only 2.50%, even if they took rates to zero in one step, how simulative could it be to either the markets or the economy? 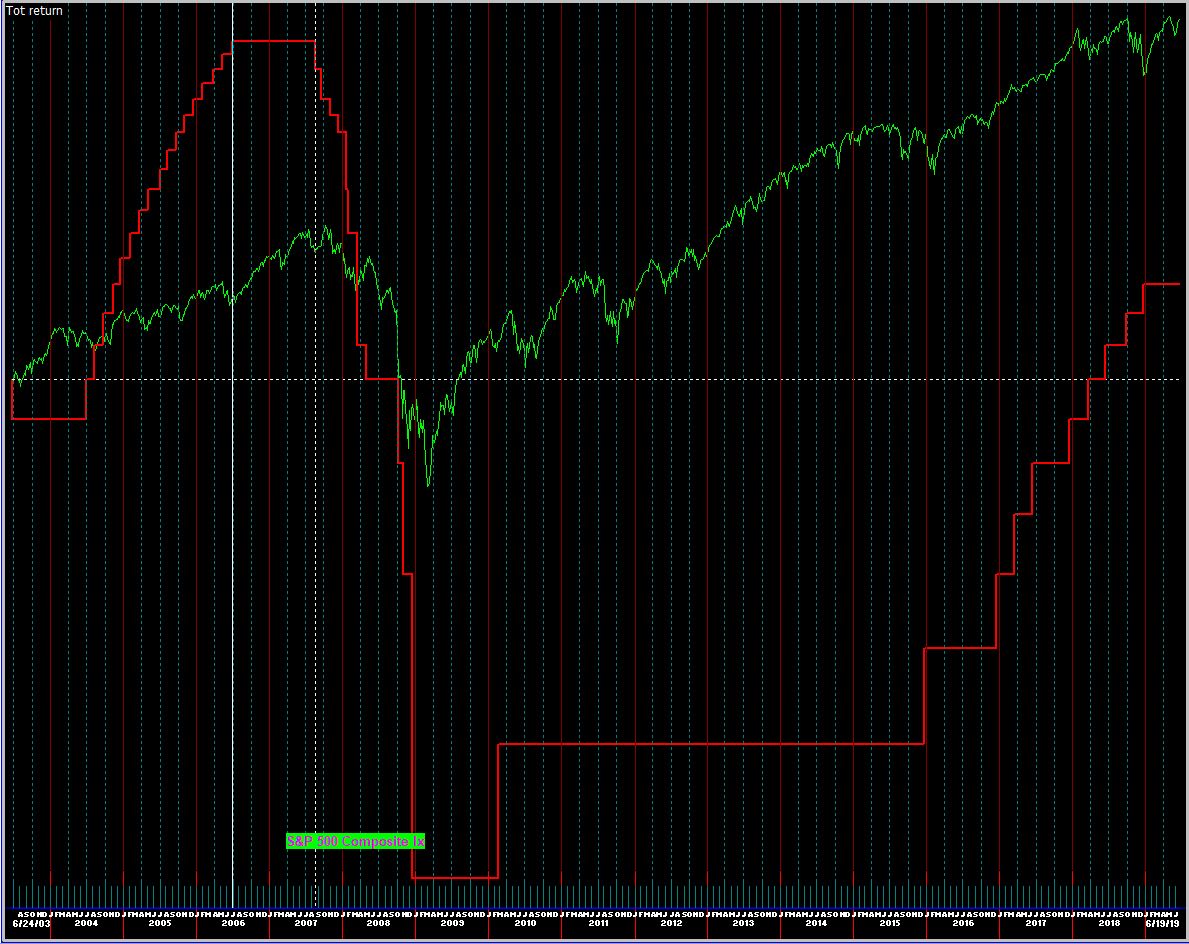 Focus your attention between the vertical white bars.  This was the last transition period for Federal Reserve policy when they went from a policy of tightening (raising interest rates) to loosening (dropping rates).   Effectively this was a “hold” period that lasted a little more than a year.  I think we are in a similar hold period now which is the point of this discussion.  The Fed said as much in their meeting yesterday.  They are now on hold with pending rate cuts in the future as needed.   We would also agree with the Fed’s statement that rate cuts are not really necessary today given the weight of economic evidence, state of the labor market and mixed economic data (not great but not terrible either).  We think they may indeed “hold” on any changes to rates for the better part of 2019 as they indicated.  They would love to actually raise rates but there is no chance of that while Trump is in office (more on this in a minute).  Between the white lines on the chart, the S&P 500 gained almost 20% before making its final peak and rolling over into a rather terrible bear market.  20% is 20% percent, even if it’s the last 20%.  So that’s all good.  The bad news is that the US stock market has already gained 20% off the lows in December, precisely on the back of the change in Fed Policy from tightening to “hold”.   Is it all priced in?  Maybe.  Like I said, the market is a pretty good predictive tool.  The rally off the lows in December is still intact, despite some very choppy action in May.  Smart investors will keep their eye on the big picture and recognize two things; The first is that the last year of every long-term bull market in stocks is often one of the strongest.  The second is that it is the last positive year of the bull market.  Play it as such.

It is painfully obvious that Trump controls the Federal Reserve now.  The Fed hasn’t been independent since the days of Greenspan but historically, we have never had a bully of this magnitude in the White House.   Powell and Co. are puppets of Trump and his Twitter frenzy.  Trump wants lower rates, Trump will get lower rates, whether they are needed or not. Trump wants a second term and the stock market is the only polling source he cares about.

The Federal Reserve, by way of the White House, would love nothing more than to see the value of the US dollar fall versus other currencies.  A falling dollar is good for stocks, helps with exports and is generally supportive of economic conditions.  The markets are now poised to break out to a new all time high this week and they are doing so because the Federal Reserve is talking down the US dollar.   In doing so, they may not need to lower rates as they have accomplished their objective by just talking about rate cuts.  Trump is smiling.  You know who else is smiling?  Gold investors!  We are now back in Gold (bullion and miners) as the conditions for investing in Gold look about as good as we’ve seen since 2001.  The US dollar will be under a lot of pressure (down) considering all the political pressure as well as the fact that the Federal Reserve will have no choice but to fire up the printing press once they drop rates back to zero.  Much of the world is already operating with negative rates and Gold loves a good negative interest rate party.  The Federal Reserve would love to see inflation, but they can get it as we continue to import deflation and cut costs with technology/ software, etc.  The Fed has already proven that they will do QE over and over again, paid for with freshly printed US dollars.  Price stability could not be a mandate when they willingly devalue our base currency right?

So, there you have it, three Lies and a Truth about the Federal Reserve.  History may not repeat exactly but so far; it’s been a good teacher.