As promised, this update will be the first of a three-part series that brings to light three longer term, pending, Investment opportunities. Please, do yourself a favor and don’t run out and act on any of this information today. Wait, watch and let this serve as a guide as to where we might look to generate returns looking forward.

Let’s start by defining what we mean by growth versus value because these adjectives cover a lot of territory. First, we’re talking about equities only in this conversation. That might be an individual stock, a stock sector ETF, a stock mutual fund, or even a stock index. So we’re talking stock here. Second, you need to understand that any discussion about value versus growth is relative in nature and not absolute. For instance, if we only look at one set of metrics, say the Price to Earnings ratio, of a given security, we might say, hey that is low relative to the other names in the sector, or compared to the market as a whole. We might conclude that the stock is therefore cheap or trading at a discount. In this example, we might also fall into the classic value investors’ trap. A low stock valuation might lead us to believe that we can buy safely and expect great positive returns ahead. Quite often, however, we find that our low valuation stock just continues to get cheaper and cheaper, sometimes falling off exchanges and moving into bankruptcy. So you have to remember that valuation, however you define it, does not mandate a specific future outcome for that stock. Remember, the market is quite efficient as a pricing mechanism. Value investors should always ask the question, “why is this so cheap?” before buying. The same is true in the opposite for the growth sector with valuation metrics seemingly high and yet the price of the security just continues to rise and rise to new all-time highs day after day. Many of the FANG stocks fit into this category. Now with that tutorial on relativity out of the way, let’s talk about reversion to the mean.

There is a pendulum factor to the financial markets. By that I mean, that nothing rises forever or falls forever. There are times when it seems like just that after a trend remains in place for years and years. They used to say that about technology after nearly 20 years of unbridled price appreciation in the 80’s and 90’s. But then the dot.com bubble burst and it was all taken away. They used to say that real estate never falls because it has use value or rental value or other silly justifications. The real estate collapse from 2006 to 2011 caused more wealth destruction in our country than any stock market event in history. Nothing is forever when it comes to asset pricing (or credit pricing for that matter). Write that somewhere near your computer screen with that big fat permanent marker. Huge trend reversals happen every so often and they can be sources of great wealth accumulation or destruction depending on how you are positioned and whether or not you have been patiently watching and waiting for the turn. The big turns don’t happen that often but when they do, the really smart guys recognize the change and load up with the new trend. Practically every major market sector in the US has experienced at least two to three significant multi-year reversals since the year 2000. A reversal of a major trend that has been extended way beyond a normal level, either up or down, is considered to be a reversion or, as they say, a reversion to the mean. The mean is the average of course and that implies that our asset category is reverting from an extreme to a more average or normal condition. And very often, with financial asset pricing, we’ll see not only a reversion to average but a full-blown pendulum swing to the opposite extreme before the trend begins to slow down.

The final important variable to understand is that value can show up in any industry, country, sector, style or size investment category. Yes, there are specific defensive areas of the market that are considered value sectors like consumer staples, healthcare or utilities but even these can trade as if they were growth sectors as times. Conversely, we could make a case that Apple is more of a value play (almost a consumer staple now) within the growth-oriented technology sector. Value is generally found in names and sectors that are more consistent, or among those areas that pay out some sort of dividend or equity income. They are home to investors who don’t like drama with their money and their life savings, thus the name. Value represents not only a state of valuation but also of things that we tend to need rather than want. When times are good, we spend our money and our investment dollars on wants. When times are not so good, we all tend to spend more of our money on things that we need, like investments that “need” to not drop in price.

Back to the script. Today we are in a growth market environment. Investors are chasing growth at all costs, literally. $1000 stocks are not that notable anymore. Earnings kind of matter but not really as long as the price continues to go higher. As I write, the S&P 500 Growth Index ETF (IVW) is up nearly 14% YTD while the S&P 500 Value index ETF equivalent is up a little over 2% YTD. The same type of gap is happening across the globe, not just in the US and it has been a relatively strong trend since the early days of the new bull market in 2009. Here are a couple relative strength charts showing this incredible divergence between the past performance of growth versus value. 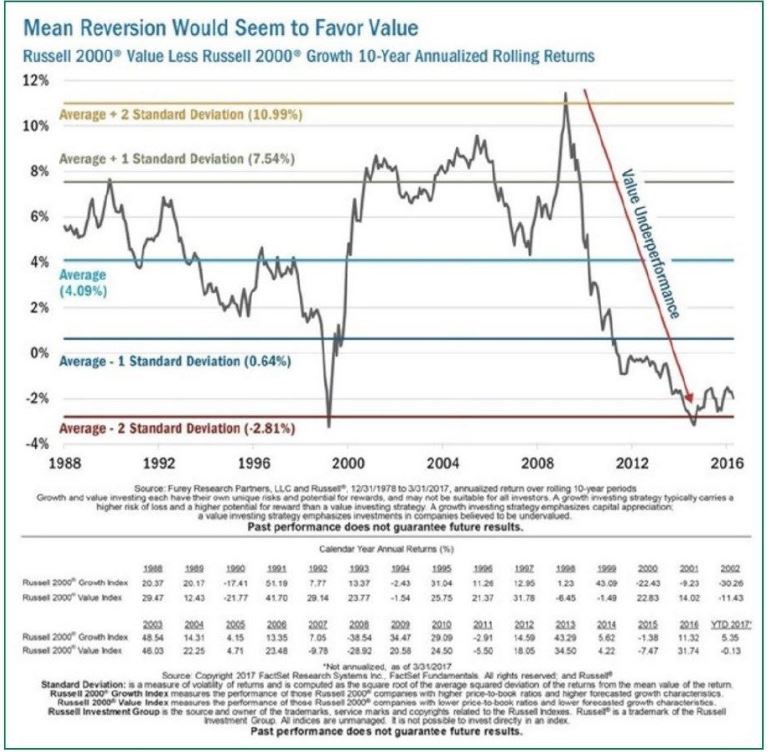 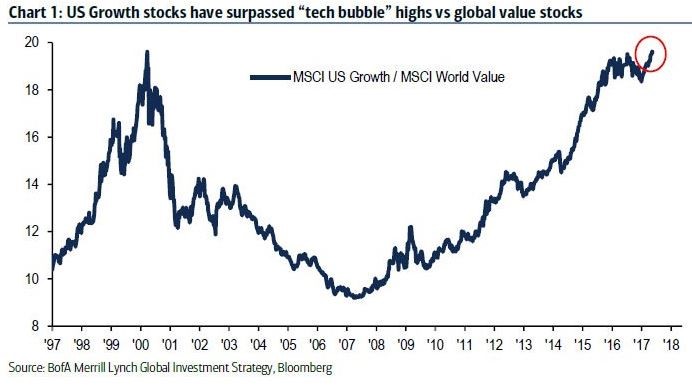 Obviously, we don’t have to be Buffett to recognize that this relative performance is stretched to the same place it was back in the year 2000. Back then, technology was driving the growth sectors more than anything and valuations were just ridiculous. Today, the growth sector is not so richly valued as it was in 2000 but today we also see a value sector that is more deeply discounted leaving us with the same gap in relative performance in the aggregate. Maybe, the gap will continue to widen in the years to come. We don’t think so. We think we are very close to one of those decade-long trend changes that could easily see a reversion to the mean where value outperforms growth. At this point, we can’t justify the trend change because we never know why until after the fact. But, we can say that the probabilities of a significant change in leadership for financial markets across the globe are rising dramatically with each day now. This is the first pending investment opportunity that seems both timely and significant looking forward. Growth investors should be looking overseas, as there is simply nothing attractive in the growth sectors domestically in our view. But value investing among US-based companies might become quite attractive in the months to come.

Stay tuned for the next two investment opportunities on our radar in the next couple updates.