I’m reading a lot of articles regarding the impact of the Federal Reserve lowering interest rates.   The articles and posts all seem to have the same theme and they are all missing one very important point.

When the Federal Reserve lowers the Federal Funds interest rate, they are doing so to stimulate the economy as well as keep the US dollar in check against our trading partner currencies.  During late economic cycles like the one we’re in now, when weakness begins to show up, as it is now, the Fed has had some success with their easing of monetary policy.  Twice, as a matter of fact, they were credited with staving off a recession by aggressively lowering rates.  I’m not sure I would give that solitary act all the credit, but the outcomes were favorable in those two cases.  In literally all other cases in the last 100 years, the Fed’s series of rate cuts, was simply coincident with the US economy moving formally into recession.  They prevented nothing.  In the past, the Fed was also lowering rates from a much higher starting point.  In the last cycle, they started cutting rates in August of 2007 from 5% and dropped them aggressively down to 0.50% just as the S&P 500 rang the bell at its lowest point in the bear market of -48%.  Lowering rates from 5% to zero did nothing.  Today, the Fed has lowered rates twice starting again in August of this year from a high point of only 3%.  After two rate cuts the S&P 500 is down 0.50% - not really a robust or favorable reaction after a few months.  But dropping rates has been very favorable for select sectors of the economy.  Home-builders are up 14% in just two months.  Real estate in general remains solidly on the top of the leader board YTD, QTD, and month to date.  Treasury bonds, utilities, and high yield corporate bonds have all seen some accelerating price gains since the Fed started dropping rates again.  That’s all good as home-building and real estate are one of the great pillars of our economy.  Not so much for utilities and corporate bonds.

Also creeping toward the top of the leader board for the first time in a while is Europe, Japan, and parts of Asia.  It would seem that the Fed’s new easing policy is slowing down the rise of the US dollar and providing a bit of a boost to international investment themes.  Again, all good as we like to have that type of diversity in our portfolios.

Given the sequential decline in economic reports over the course of the last few months as well as a new level of chaos in politics (I didn’t think there could be more), it will be critically important for 3rd quarter earnings to come in almost shockingly strong.  We are now starting into earning season so each day will bring big news and big action in stocks, up and down.  We feel like the burden of proof is now on the bulls to convince us, all investors, that the game is not yet over.  The bulls need some very strong earnings starting right now if stocks are going to move higher into year end or avoid erasing the recovery in prices since January.  All things considered, if the Fed lowered rates to zero tomorrow as Trump seems to want, it would seem unlikely that stock prices would just get up and run higher.   The entire financial system, including stocks, has already adjusted, benefited from, historically low rates for most of the last decade.  Real estate prices are not going up anymore, but buyers are still stepping up based on new-found affordability in their mortgage payments.  That does not make the house a good investment mind you, it’s just a relatively affordable living option really. So, the big maybe is whether or not lower rates will have the desired stimulative impact on stocks, the economy, jobs, etc. The Fed will lower rates again so I guess we’ll know soon enough.

Here’s the point that no one is talking about.   When the Fed lowers rates, they also lower the rates on savings accounts, and other cash alternatives like CDs.   If we include all deposits, cash, money markets, and CDs with maturities less than 2 years, we know that the aggregate money supply (M3) is nearly $15 Trillion in the US.  When the Fed raises rates, they are effectively stimulating the interest on that massive pile of cash.  When they lower rates, the opposite affect occurs.  Fed Funds interest rates and the interest paid on money markets and CDs are very tightly correlated.  They both rise and fall together.  Here’s what that looks like in the current decade.  These charts have not been updated to reflect the last two rate cuts, but you can see the 6 mos, 1- year, and 5-year CD rates already starting to roll over.  We’re at the top of the cycle and these lines will all work their way to the bottom again. 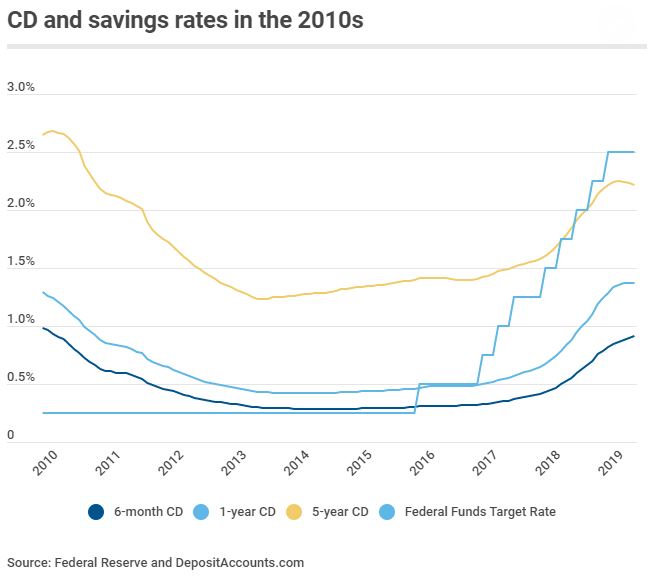 Now here’s another picture of the same thing looking back at the 2000’s decade. You can see what happened to CD and money market rates as the Fed cut the effective Fed funds rate to zero almost twice.  From here on out, those who are carrying cash or plan to roll their CDs into another maturity, you have what is known as reinvestment risk.   You are going to be paid less and less as each month passes as your different savings vehicles mature. 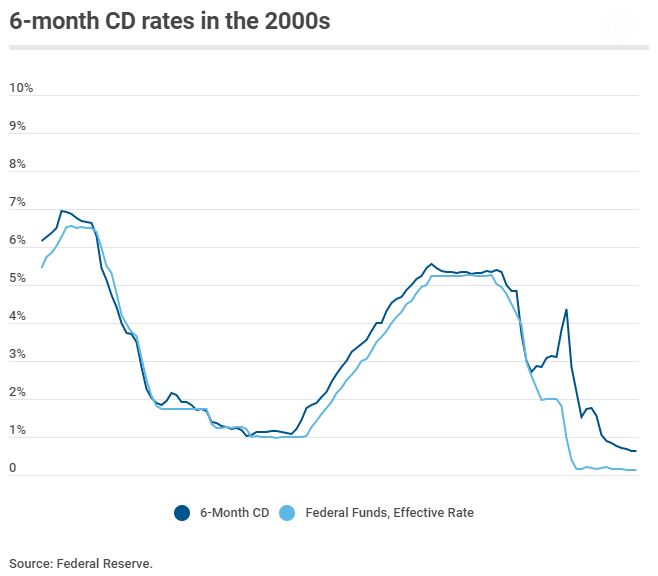 Just a little tip while we watch stock do nothing.