Okay, so the current administration and the Federal Reserve is now the lender, buyer, and soon to be employer of last resort for the United States of America.  This is now my third tour in 20 years of this crap, and I’m outraged!

Please excuse the rant in this episode but I’m going to say what must be said. Our entire economic system is based on capitalism which is a form of meritocracy. You do good things; money comes to you. You do bad things; money moves away from you very generally speaking. I know there is privilege and social mobility issues but by and large the system has those roots, right? Well we are now witnessing the third period in 20 years where our fearful leaders and the Fed are working hard to poison the very roots of capitalism. Larry Kudlow, who is a TV personality, and Trump, yes man on all things economic inside the White House, pounds the table about the merits of capitalism. He says that the markets and the economy will find sustainable pricing, will work toward full employment, and business growth will eventually lift the economic tide carrying everyone in their little ships higher and higher. Maybe he’s right, maybe not. But capitalism also has a darker side that is seen in Mother Nature. It is the death and Darwinian side that culls out the weak (bad businesses, bad people, bad behavior) and ultimately makes the herd stronger. Today, we are watching the Fed come to the rescue again and in doing so, they are attempting to eliminate the dark and necessary side of Capitalism. They are rewarding rampant speculation, they are rewarding those who use massive leverage, they are rewarding bad behavior and conditioning (again) us that they will backstop all forms of risk. In doing so, risk becomes a thing we talk about but don’t really experience in its full form. Larry must be freaking out in a wave of personal identity crisis. We haven’t heard from Larry in a while have we? That’s because he’s under the bed in a fetal position wishing he had another job.

Trump doesn’t want anything bad to happen to the economy as we head straight toward elections.  If elections were held today, he would be done and he knows that. Very suddenly, Trump has become the Bernie Sanders of the financial world, effectively putting control of the entire bond and credit markets in the hands of the US government all in the name of “providing liquidity”. What they are really doing is bailing out leveraged hedge funds and private equity firms who are under forced liquidation and need the bond markets to cover their asses. Bernie wants the government to provide the same sort of massive support and control but just aimed at the humanitarian side of the ledger. They are both socialists of the first degree now, make no mistake. It’s so painfully obvious to me that Trump will sacrifice the human condition in favor of the financial world. He wants us all to get back to work on April 12th to get the economy going again, and give him a chance at reelection. But Mr. President, the Virus doesn’t care about April 12th. Shall we all follow your “decree” and spread the infectious disease more, just to pump the stock market another 1000 points?

We get what we deserve. In the last twenty years, we have experienced two bear markets in stocks of 50% each and we’re probably on our way to a third. These are events that don’t typically happen in this magnitude more than once in a generation. But they are happening with high frequency now as a byproduct of a Fed and administration that do not allow the dark side of capitalism to truly feel the pain of risk. If we do not let our kids fail, they never learn. Hedge funds and leveraged speculators should be wiped out permanently. Companies that should die, should be allowed to die. Fraud should be exposed and purged from the system. Nothing is too big to fail, nothing. In the end, we all suffer. Take a look at the twenty year returns for various asset classes now. 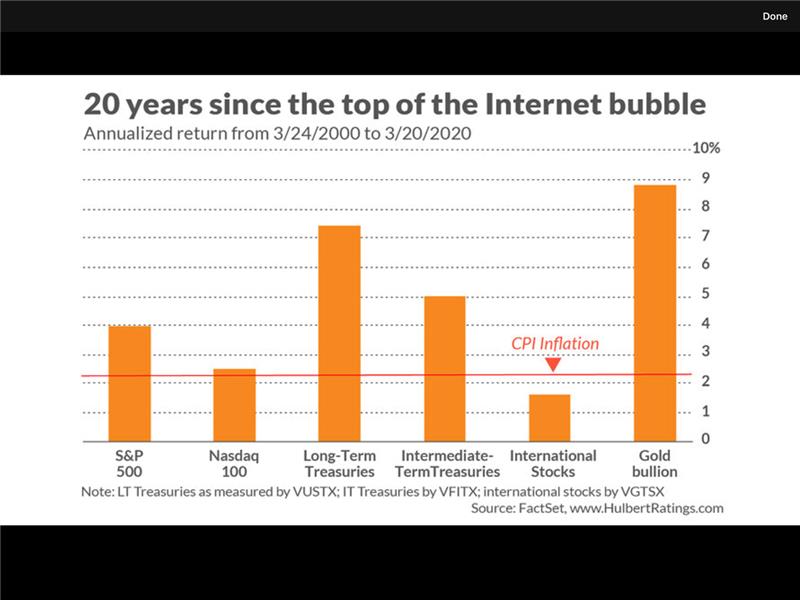 Gold is the best performer by a long shot. What does that tell you? It tells you that the Federal Reserve is destroying the value of the US dollar with all this stimulus. Stocks are barely up 4% as an average annual return. When we attempt to cover up risk, we ultimately create massive cycles of price destruction as we reward speculation. Returns over time suffer folks. We are doing ourselves no favors by relying on the Fed to save the day.

Looking back over the last twenty years to date, I am pleased to report that our All Season investment strategy has performed admirably compared to the S&P 500 with a healthy return advantage on an average annual basis net of fees with real client accounts. But more importantly, we have never experienced bear market losses and operated regularly with approximately 1/3 of the risk of owning your basic S&P 500 stock index fund. We have done so by following our time-tested process of dynamic asset allocation across multiple asset classes, avoiding huge bear market losses, and seeking compounding consistent positive returns wherever we can find them. 20 years is a long time and all the proof we need to say that our system is truly better. All Season in Red, the S&P 500 in Green. 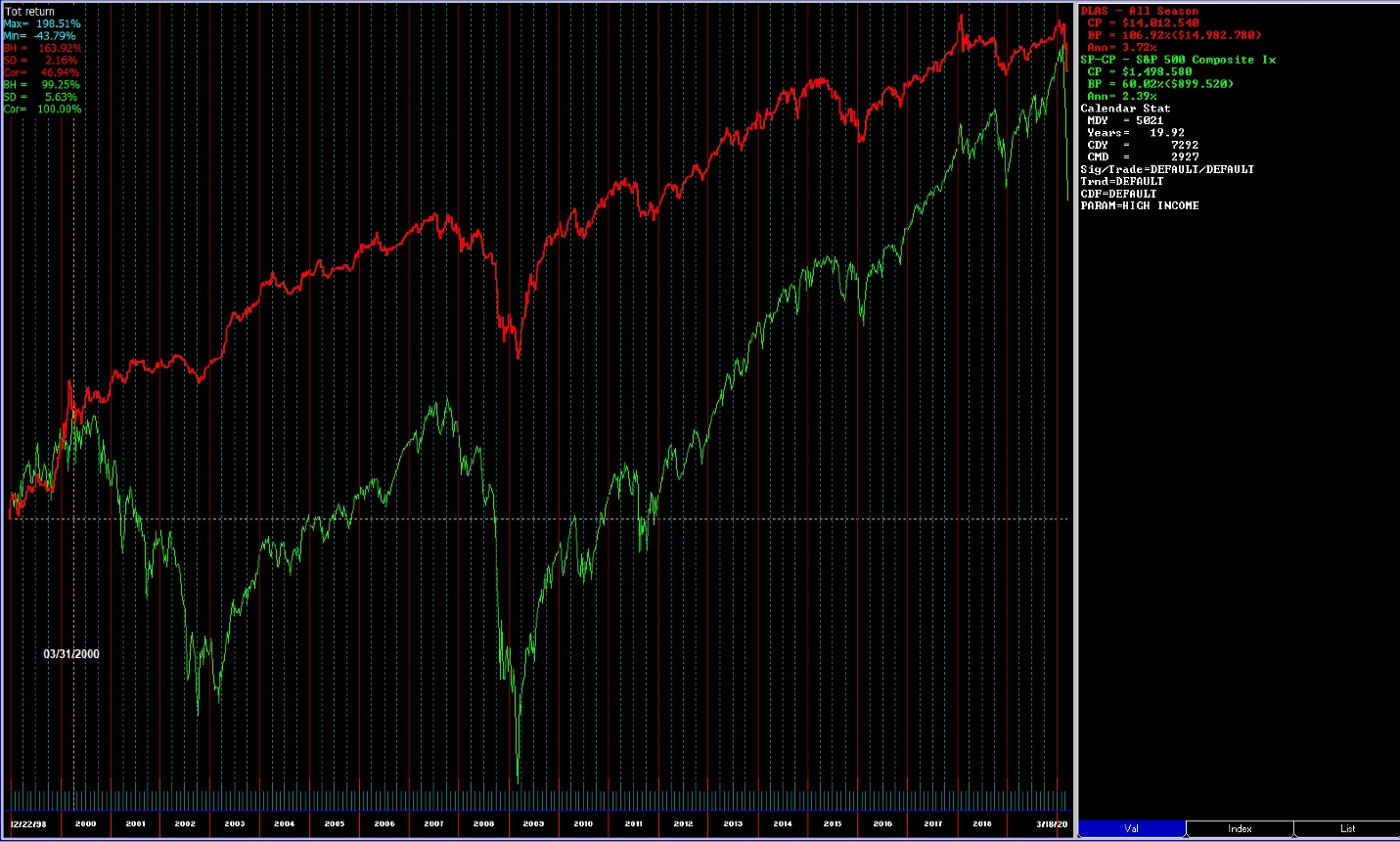 If we want to see stocks generate higher returns over time and not see three generational bear markets occur within every 20 years, we should all be OUTRAGED! Let capitalism do its thing, let it fail. Maybe then we’ll really get back to making good choices, respecting risk for what it is, and build a sustainable financial system.

Sorry for the rant, back to business