Trump and the Federal Reserve have begun a feud that is leaving Investors and the American economy potentially caught in the crossfire. 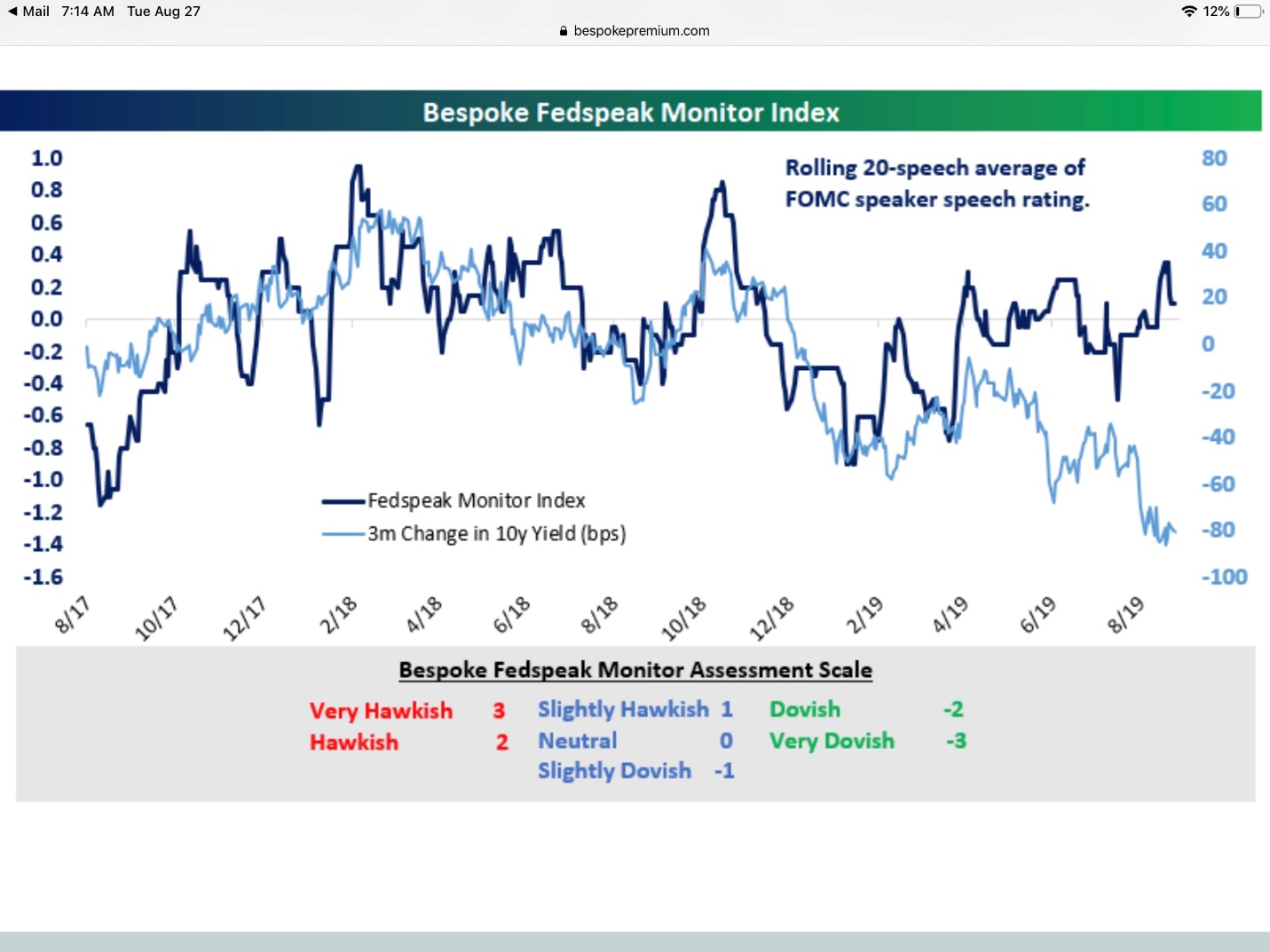 The Federal Reserve is very much wanting to flex their independence muscles and show the world that Trump cannot tell them what to do.  Based on Bespoke’s Fedspeak Monitor (dark blue) versus the Bond market’s perception of where rates should be (light blue), there is an enormous gap in future expectations.  Either the bond market is going to get slaughtered and rates will go higher to sync up with current Fed policy (Trump loses) or the Fed is going to cut rates more aggressively than they are saying currently (Fed loses) to meet the demands of the White House and bond market expectations.  One of them is going to be lying in the dust – R.I.P.  I couldn’t say how markets will react either way, but they will react with all the increased volatility that we have seen in the last 18 months.

We have talked at length about the positive impact of share buybacks on the financial markets.  In fact, since the corporate tax cut in January of 2018, buybacks have been largely responsible for keeping the US stock market alive while the rest of the world’s markets have been under very heavy selling pressure.  The US economy has been getting weaker statistically for almost 5 quarters but share buybacks have spiked over the very same 5 quarters, keeping stocks within 10% of the old highs…. Until now. 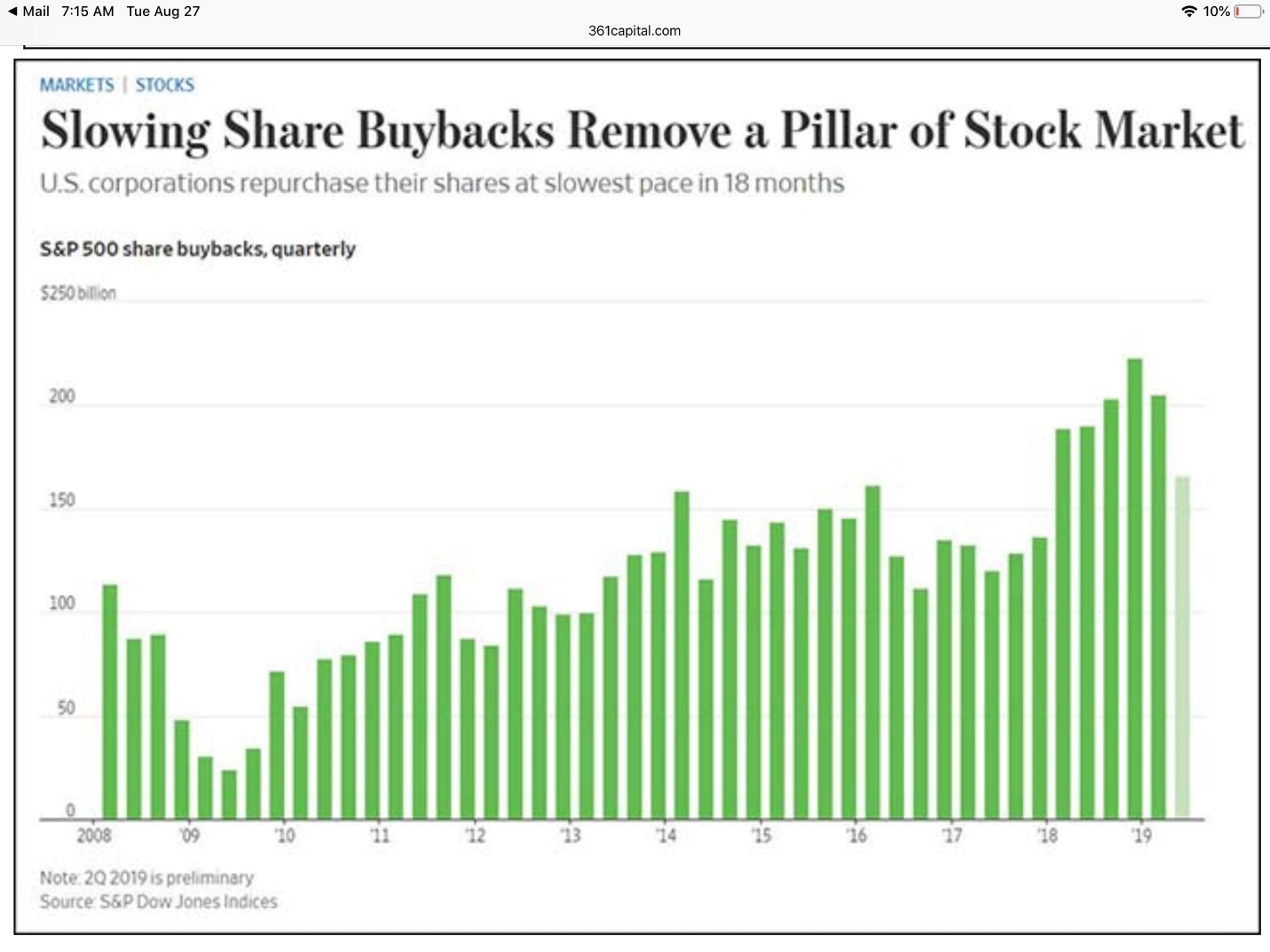 We couldn’t know what’s happening in corporate board rooms.  Are corporations not feeling that confident about their own future earnings?   Trade wars and wage inflation cutting into profits?  Global slowdown hitting US soil?  Political Chaos?  Probably all of the above. 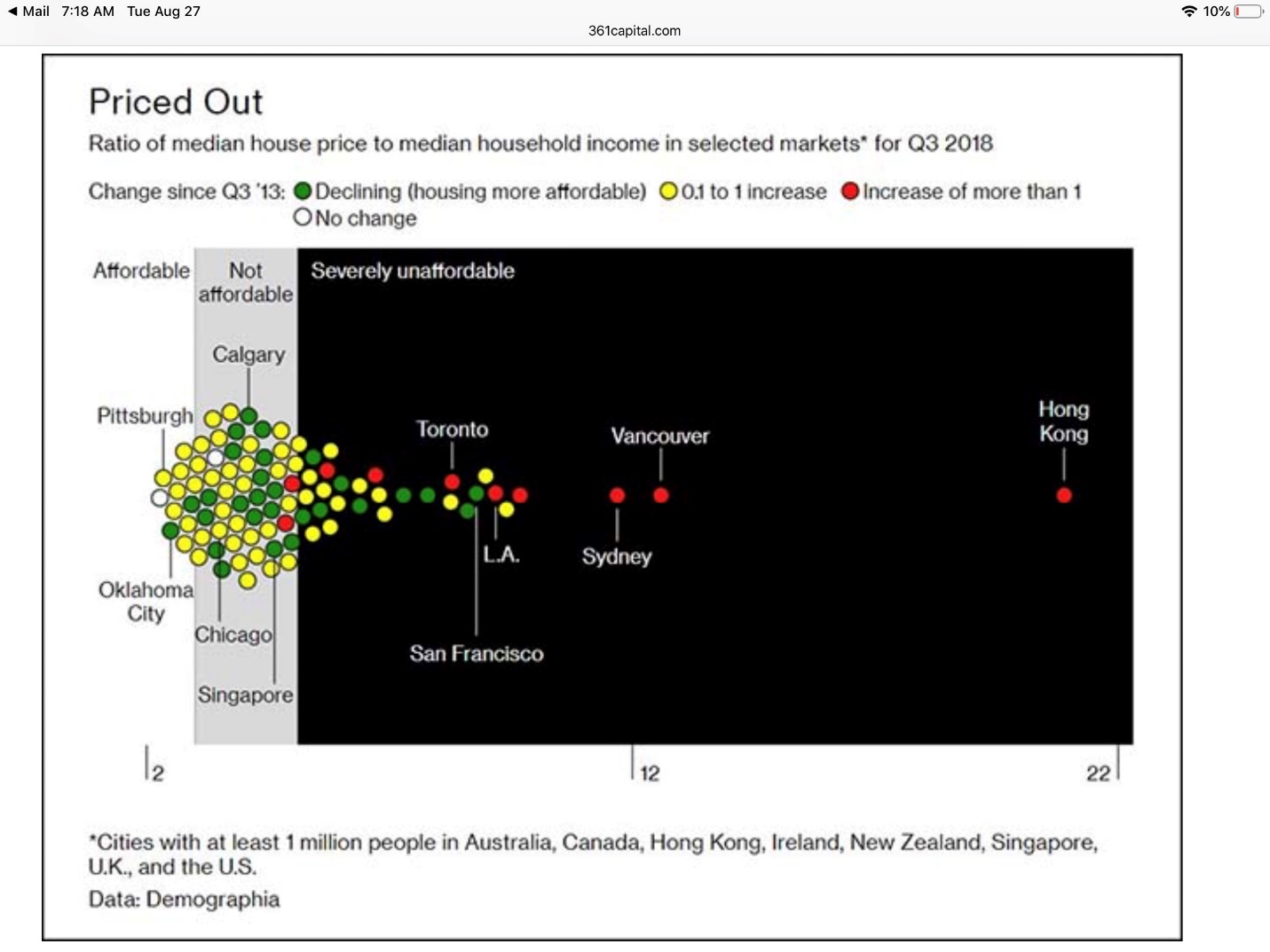 Housing is on everyone’s mind.  Should I buy or rent?  Are prices going up, flat (or even down in certain markets).  Interest rates have been so low for so long that changes aren’t really impacting prices as much as you might think.  It’s really hard to get a read on where we are or what to do with real estate.  We do know that prices are very high not just in major US cities but in other cities across the world.  Even with lending rates approaching zero or even negative (In Denmark, the bank will PAY you monthly interest on YOUR mortgage!), affordability is still very low.

And now this from Case Shiller… 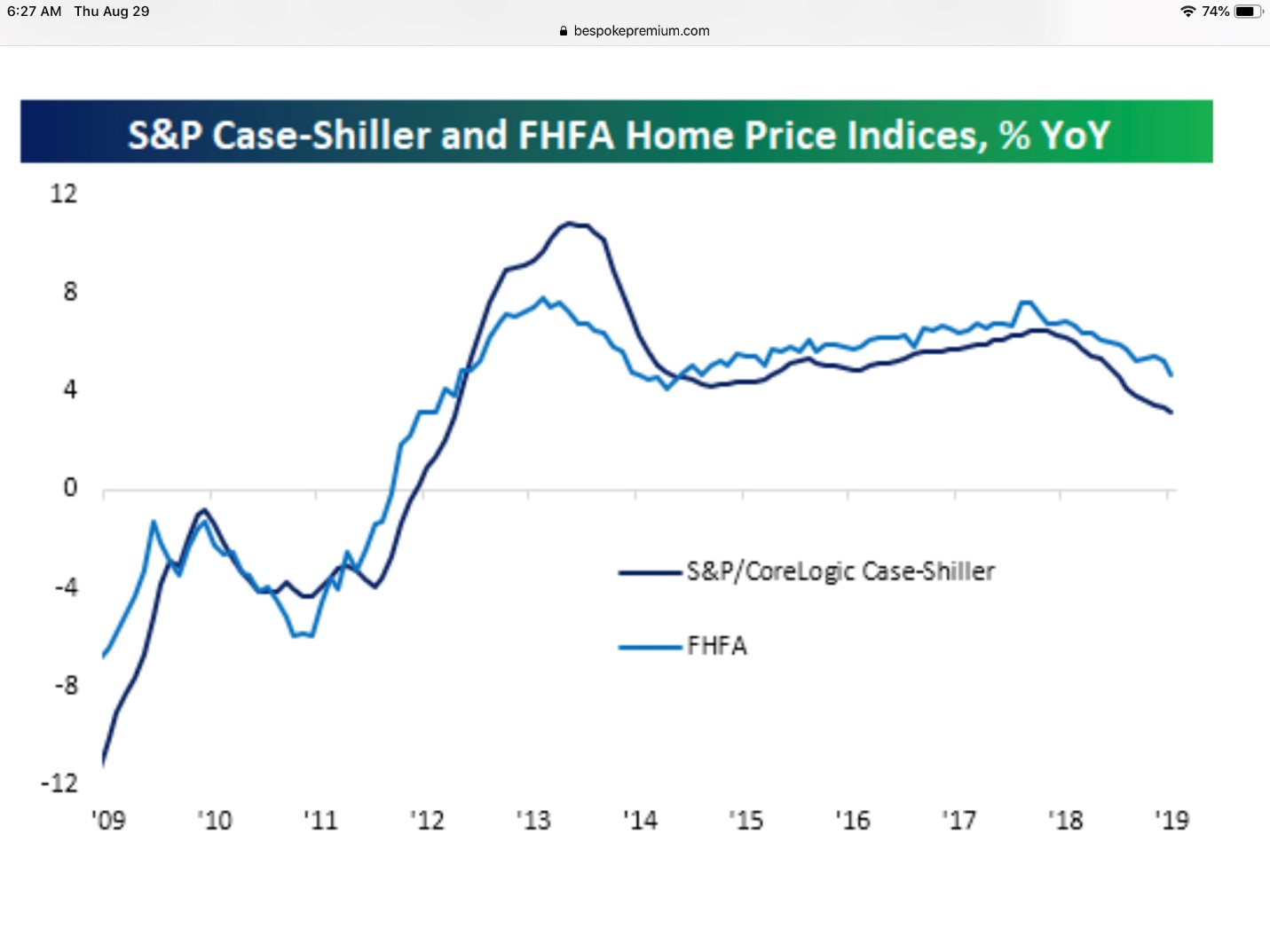 To be clear, this is NOT a price chart.  This is the change in aggregate US home prices year over year as a percentage.   Note the fact that we didn’t see prices actually turn up until June of 2011.  Real estate lags the financial markets and the economy!  Also note that the price lag occurs at the top.  Prices are still going up, while stocks and the US economy may have peaked.  We don’t expect real estate prices to fall in aggregate but rather we expect prices to finally behave as they have done for the last century, track inflation rates (2-3%).   Don’t shoot the messenger but here’s a secret.  The last 20 years of price activity in real estate are a historic anomaly.  We saw big gains in the early 2000’s evaporate into price declines.  Now we have recovered from those losses but just barely.  Looking forward, any appreciation greater than the rate of inflation, is simply not sustainable.  If you’re buying, building or spending a chunk of money on an upgrade, keep that in mind.  Expect 2-3% price gains on your real estate assets for a very, very long time. 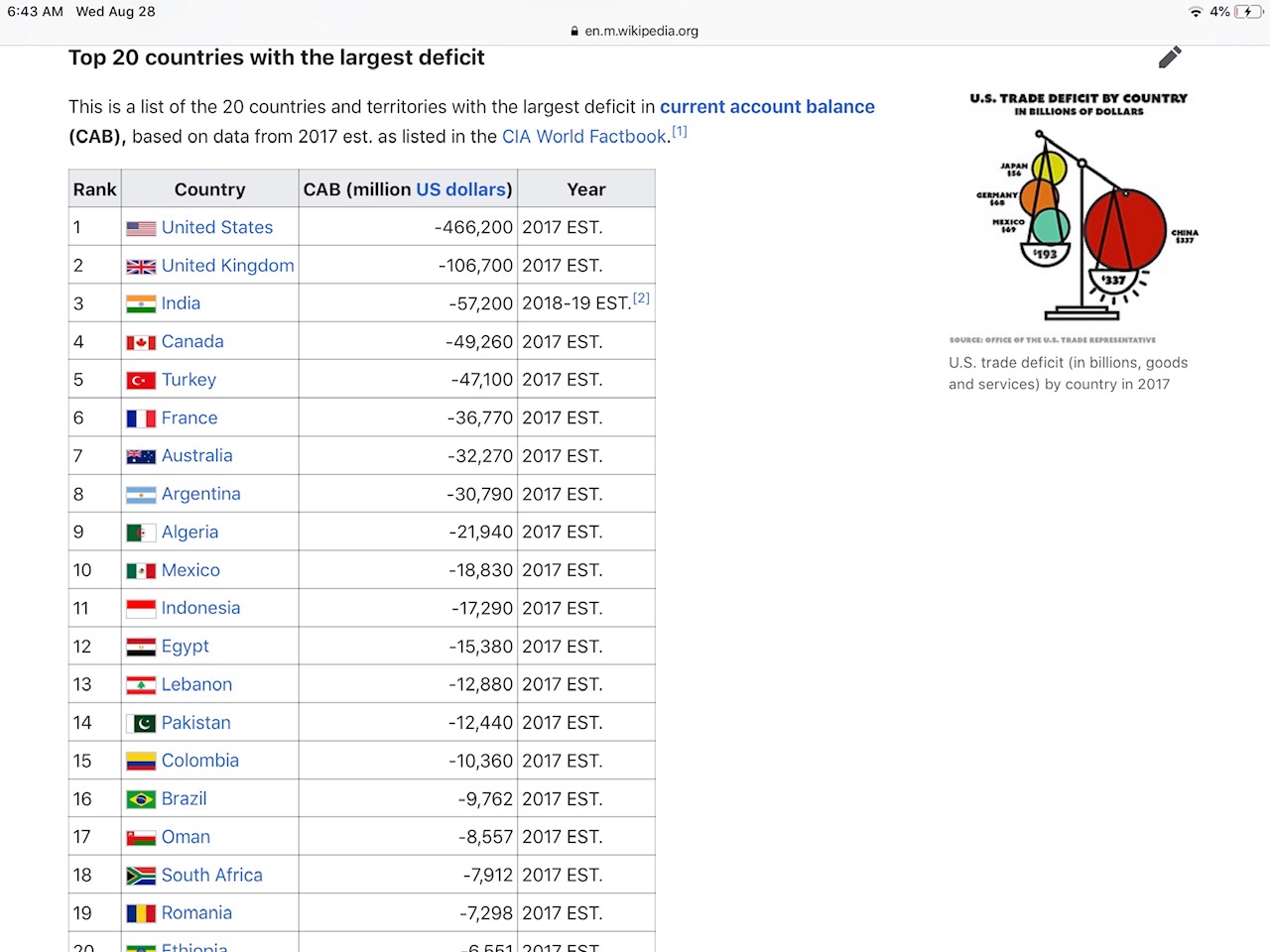 Our trade deficit with the world, mostly China, is nearly four times larger than the next highest country.  That means we import nearly everything.  As a nation of consumers, that’s what we do; consume stuff made by others.  We don’t make much domestically and we don’t export much, relatively.  I would love to hear a coherent explanation for why adding taxes (tariffs) to imported goods makes sense for the US?  I only have a degree in economics and finance.   Anyone?  Really anyone?  Is this about jobs?  If so, consider this.  A Chinese employee in manufacturing works a 12-hour day and a 6 day work week at a wage that is 1/3 or less than that of a US worker.  I have images of that well groomed guy in the brightly lit GM factory wearing nice clear safety goggles, smiling as he thinks about his employment benefits.  In China, there are no safety glasses, and not a lot of smiling.  We have lost jobs and generated a massive trade deficit because American workers are very expensive in the global labor pool.  We have also lost jobs to automation.  We are also addicted to cheap consumer goods.   Walmart/ Target/ Dollar Store are basically boxes of Chinese stuff.   Tariffs and trade wars will solve none of these harsh realities.  Tariffs are inflationary and bad for everyone and I do challenge anyone to justify why Trump is waging a global trade war given all of the above.  Why are we doing this?

Lots of Cheap Stocks to Buy!

I’ll finish on a positive note.  We maintain lists of companies that meet our “Value” Screens.  We are looking for companies that are trading at significant discounts, have very low valuation metrics, high free cash flow and preferably healthy dividend streams.   Well, folks, our list is getting very long and very diverse across many different sectors.  We’re going shopping and beginning to take new positions again for the first time since last Spring.  In the short term, we’re getting a few buy signals from this oversold condition and the value side of the market is waking up.  This could be very good for returns in our equity strategies which have struggled with the rest of the stock market for the better part of a year.  We bought a few positions yesterday and will buy more today.  More on this later.

Thanks to everyone who made our full house Solution Series workshop on legacy planning provided by our legal partner Merry Balson and her new associate, John Valentine.  We will be carving up the presentation into digestible video clips and sending those out shortly.

Have a great week!