Investing in the Last 12 Months of the Bull

Despite what is becoming a consensus view that the bull market is over, we see compelling evidence that there is at least another 12 months of higher prices as well as the potential for some healthy double-digit gains before the fat lady does her thing.  In this update, we’ll provide an overview of a still favorable environment for patient investors who know where to look, as well as our best guess at timing.  Please remember, today’s guidance can change quickly for any number of reasons.  Nevertheless, it’s good to have an adjustable plan at all times.

Buying Dips Until We See Signs of a Recession

Let me get this important statement out of the way.  We are heading for a recession in the US economy, perhaps even globally.  It appears likely to begin in the next 18-24 months by our estimates and there will be a great deal of wealth destruction both on Main and Wall Street when things really get upside down.   But between now and then, there is the potential for nimble and experienced investors to make some very real returns.   On the other hand, if you don’t know what you’re doing, making long term bets with illiquid investments (investment real estate, private equity and such) or passively holding and hoping, you’re likely to get smashed.  As Jared Dillian of the Daily Dirtnap (my new fav) likes to say, “the last 9 months of every bull is like trying to pick up nickels in front of a steamroller”.  From our view, based on some very solid historical precedents as well as the current condition of leading economic indicators, there are a lot more than nickels on the path ahead and we still have enough time to reach for them.

In the last update, I made an important statement.  Some of you caught it and commented.  I said,  “so far, we have only seen an increase in volatility, but not RISK as we define it”.  So how do we define “risk”?  Risk to us is the high probability of semi permanent or unrecoverable loss of capital associated with bear markets.  These are the types of losses that take years and years to recover which means we need to strictly avoid them because…. Because… well you know the answer.

Because Life Is Short

No individual investor has a long enough investing career to waste 7, 10 or 13 years going through a major loss and recovery cycle.   Can’t happen?  It just did.  From March of 2000 to July of 2013, the US stock market lost more than 45% twice and failed to make a sustainable new high. Life is too short to run the risk of going through that nonsense.

So again, we have seen a very notable increase in price volatility but the probability (Risk) of a bear market having begun already is still very small. More on this in a minute.  Moreover, statistically, the last 12 months of a long and profitable bull market in stocks can provide investors with some of the strongest returns of the whole multiyear uptrend.  In fact, the average gain in the US stock market in the final 12 months is 16% with a range of +10% to +30% (these are not nickels) according to an impressive piece of forecasting research from Guggenheim Investments in November of 2017. 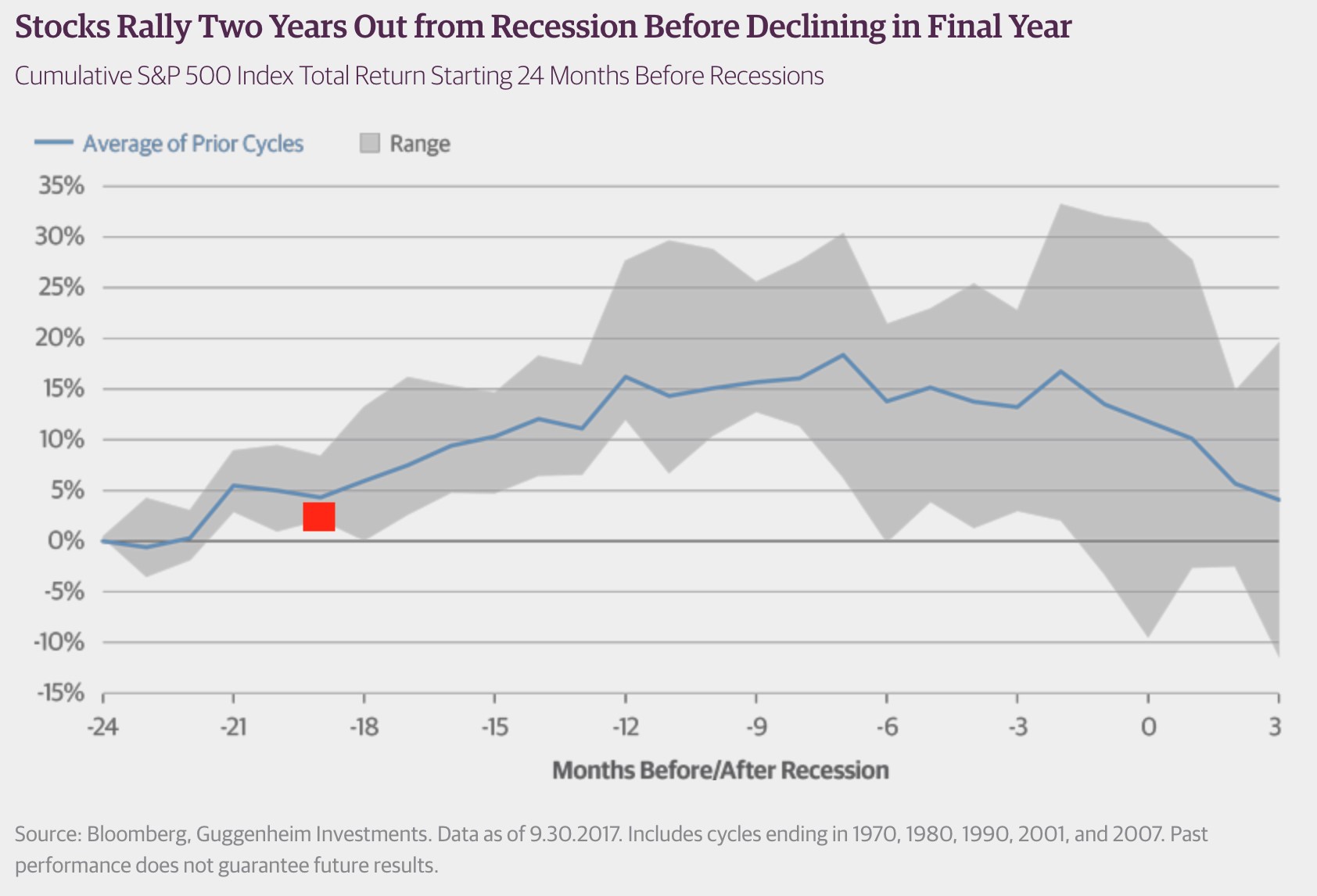 The million-dollar question is of course, when is month “0” (start of the recession).  We’ll get into the details of that guesswork in a minute but we placed a red square on the chart above where we think we are today.

As a general investing rule, investors should continue to focus on buying market pullbacks, even somewhat deep corrections, until there are identifiable signs of a recession.  The current bull market in stocks started way back in March of 2009 and we have had deep corrections of 10-15% several times between now and then (2011, 2012, 2015, 2016 and now again in 2018).  Investors who aggressively bought the lows of each of these corrections have made a lot of money.  In the previous bull market leading up to the final peak in 2000, we also had several deep corrections, one of which stands out to me as substantially similar to the situation I see today.  1998 was a brutal year for investors.  Stocks ran up +22% into July of 1998, fell dramatically into October by -19% and then ripped higher to finish the year +26%.  It was murder for trend followers but those who stuck with the bull market were rewarded again in 1999 with another year of 20% gains.  We see the current situation as substantially similar to the last 18-24 months leading up the final top in stocks in 2000 including the potential for the current correction in stocks to be deeper and scarier than many are prepared for.

But here’s the critical information.  There are still no identifiable signs of a recession yet.  Yes, we see the condition of our economic indicators as consistent with all other late business cycles, but in their current state, we shouldn’t expect the US economy to actually contract until at least the second half of 2019.  Without getting into the details, these are the classic warnings we watch for signs of  recession:

So again, the condition of each of these indicators is in a state that clearly indicates we are in the late stages of the business cycle and that the risks of a recession are rising, but more importantly, we cannot identify any signs of recession today.  So until further notice, our plan is to buy corrections with the anticipation that there are still some very worthwhile returns ahead.  Now let’s try to be more specific about timing.

Timing is everything.  As regular readers know, we have been sitting on a lot of cash since February moving between 20% and 40%.  We have put a lot of long term gains in our pocket and moved into more of a trading protocol with our equity models attempting to buy short term lows with free to trade index positions and no real intention to hold them long term.  We call these “Rentals”.  We did so recently in early April but most of those buys have thus far been relatively unproductive as prices don’t seem ready to run yet.  In fact, it has been noteworthy that the markets are now selling the same companies that are reporting some blow out earnings.  When the market sells off on good news, that’s a sign of distribution and lower prices ahead based on some very negative sentiment.

We may find ourselves back into heavy cash if we don’t see buyers show up in the next several sessions.  As I mentioned above, we could be looking at another 1998 scenario quite easily (a hard and fast down 25% with a full recovery by year end).  In fact, for those who have been at this a very long time, the crash of 1987 (down 20% in a day) was also the same condition of a price shock with no identifiable signs of a recession.  Investors who understand markets,  bought the lows in 1987 and made a ton of money in the years immediately following the disaster.

Back to the issue of timing.

By current estimates, a US recession looks most likely to begin somewhere around the second half of 2019.  This is now later than some of our earlier work before the tax reform act was put into law.  Trade wars, inflation and the pace of rate hikes could easily change the timing of our future recession but for now, we’re seeing the third quarter of 2019 as a likely time period for a recession in the US.

Now we also know that stocks tend to peak out on average 6-9 months ahead of a recession (when a recession becomes identifiable!).  At that point, we need to get on the sell side of things, abandon our buy the dips orientation and get very, very defensive. We are now in April of 2018 so by looking at a calendar, we can estimate that we should be looking for a final top in stocks in the first quarter of 2019.  For all the gamers out there, that means we should be looking for an opportunity to buy the bottom of this correction (See Calling All Cars on April 5th) and ride prices higher through year end and into the first quarter of 2019 when we should plan to sell aggressively and prepare for a bear market in stocks.  I can’t be more specific than that and it won’t work out as predictably as that, but that’s what the tea leaves are suggesting at this time.

It’s Still a Market of Stocks

I’ll finish with this reminder.  We’re still seeing a ton of value in different pockets of the market.  There is real value for investors who are strong enough to look away from the glamour of the FAANG stocks as homes for their hard earned money.  We haven’t yet seen real accumulation in the value areas and may not until the broad market buckles, but we do have our buy list ready.  In the bear market of 2000- 2003, we made money for our clients every year because we similarly had plenty of opportunities to make returns where the market offered value, just like today.  Timing is everything but we’re excited with the prospects.

That’s it for now.