We are seeking “Success” over a reasonable “Judgment Period” by knowing when to embrace and reject conventional wisdom regarding perceived market trends, “Risk” and opportunities. Superior, above average, results over time are only achievable through unconventional decision-making, experience, and discipline.

This is not our first rodeo in terms of dealing with tough markets.   And there are few instances (very few) in history when all major asset classes fall simultaneously as they just did in October.  As the dust is settling, we’re finding pathways toward the future opening.This is what we’re really excited about now.

Successful Track Record of the Standard Diversified Portfolio is at Risk

Let’s look at a few realities.  Stocks are very likely carving out a long term peak from these levels.  In terms of downside risks, there are just two probable outcomes given the technical damage we saw in October in global stocks.  The first is that the current correction continues with relief rallies and new lows right into early 2019.  From here we could put in a durable low from which we can buy more confidently.  This scenario would yield a typical 20% decline from the highs and correlate highly with most garden variety bear markets that happen in the absence of a formal recession appearing.  The second outcome is a full-blown bear market with average declines of 40-50% that corresponds with recession.  Without any evidence of a recession, the first scenario is the most likely but we’re obviously keeping our eye on clearly weaker economic reports appearing weekly.  Much will depend on Trump’s trade war and the Federal Reserve’s monetary policy.   Both variables are pushing us toward a recessionary outcome so we’ll see.  Either way, stocks, especially US stocks, are most likely unproductive for a while to say it gently.

Bonds of all sorts are now in the same camp.Unproductive.  Bonds topped out nearly three years ago and continue to lose ground outside of T-Bills and short term bonds, which we own for the time being.After 30 years of falling interest rates, the tide has turned and rates are heading higher with the Federal Reserve highly likely to raise them again in December in addition to reducing their own balance sheet of bond holdings.  Liquidity is drying up and liquidity is one of the largest contributors to investor returns, make no mistake.  Remember, our own government has been the last buyer of our own bonds for the last several years as no one else would.  Yes, it’s bizarre that the issuer would also be the buyer.  This will go down in history as one of the great central bank experiments of all time.  In the process we have an obvious debt bubble out there in the form of Treasuries, owned by our own government who is delicately poking it with a pin at each Federal Reserve meeting.  Will this be the one?  Without offering a prediction, let’s agree that Treasury bonds may not provide the safety net they have in the past if and when stock prices really fall.

This moment in time will likely mark the end of the ubiquitous 60 (stock)/ 40 (bond) diversified portfolio successful track record.  This is when the mask of modern portfolio theory is removed to reveal the truth.  The 60/40 portfolio is not going to deliver the same results looking forward as it has in the past.  Estimates from the valuation guys suggest a 1-2% average annual return looking out for the next 7 years unless inflation kicks in and then those numbers become negative.  Doesn’t sound great and we’re not interested in those types of results.

This is a time to respect the realities of where things are today and find a different path to generate returns.  We see several pathways but they require some bold and brave portfolio adjustments not only in your holdings but your methods and your mind frame.You must be willing and able to make these changes on a timely basis, which frankly is beyond most investors.It requires some concentrated bets in things that seem unconventional.  Here are some of the paths we are heading toward.

What’s the difference between these strategies?Relative return is more focused on selection and trend following, where we work to keep our money in the right place, stay diversified across a bunch of non-correlated holdings to smooth the ride and enjoy a reasonably good return relative to the benchmark indices.This has been the standard of the last decade if not longer and certainly a winning approach in bull markets (most market conditions).

Absolute return is a strategy that is more focused on opportunities that develop from extremes in valuations.  It is a game of Net Exposure where we adjust our total money at risk according to technical indicators like breadth, volume, sentiment, momentum and price trends.  It is a strategy that seeks out unconventional investments that are not often found in an investors’ portfolio like gold, commodities, currencies, overseas holdings, hybrid income producers, covered call options or funds that short various indices.

For our Blended Asset strategies (All Season, Foundations and Gain Keeper annuity) we are moving from a relative return to an absolute return approach given the evidence we see today.  These strategies offer the most flexibility in terms of dynamic asset allocation and have historically been the best at generating absolute returns in situations like these.  As we mentioned in last week’s update, we took a few lumps in October as we began this transition to the new approach and new holdings and we’re already seeing the benefits show up as we make small gains on the market daily.

We believe the Growth orientation of the markets is giving way to a Value orientation now.  We saw the first signs in late 2017 and have been talking about it since then.  Leading up to the top in September, there were several weeks where value took the lead.It felt like an engine that was struggling to start.  Now, the engine is on and revving up for the first time since 2011.  Value is back and in the driver’s seat while yesterday’s winners like Facebook, Amazon and now Apple just can’t seem to hang on.  You won’t hear any of the financial media talking down Amazon because anyone doing so in the past has lost their job, or been hung for treason. Consensus opinion says Amazon will deliver and continue taking over the world.  This is conventional thinking for now but is likely to change.  Today, Amazon is on the ropes, trading down even in an up market.After a nice 8% bounce last week back up on the falling 200 day moving average, it is now seeing another surge in the supply of sellers.  Contrary to popular chatter suggesting this is a time to buy, we believe this is another window to cut your exposure.  I can hear the lynch mob coming for me.

This is What We’re Excited About

Hint, it’s not Apple, Netflix or Amazon stock.We’re seeing some exciting new trends developing in areas that have been left for dead by this market.  They are in unconventional sectors, outside of the normal view of investors.  Here are a few that we bought into this week.

I know, I know.  Common knowledge is that Natural Gas is dead and gone.  The thinking is that the new fracking technology has made it easier for Natural Gas companies to extract the commodity with lower costs causing a massive oversupply of the stuff.  Well maybe.  But those are backwards looking views.  Here’s what our research shows.

And now the price of Natural Gas is surging higher from a multi-year basing pattern. 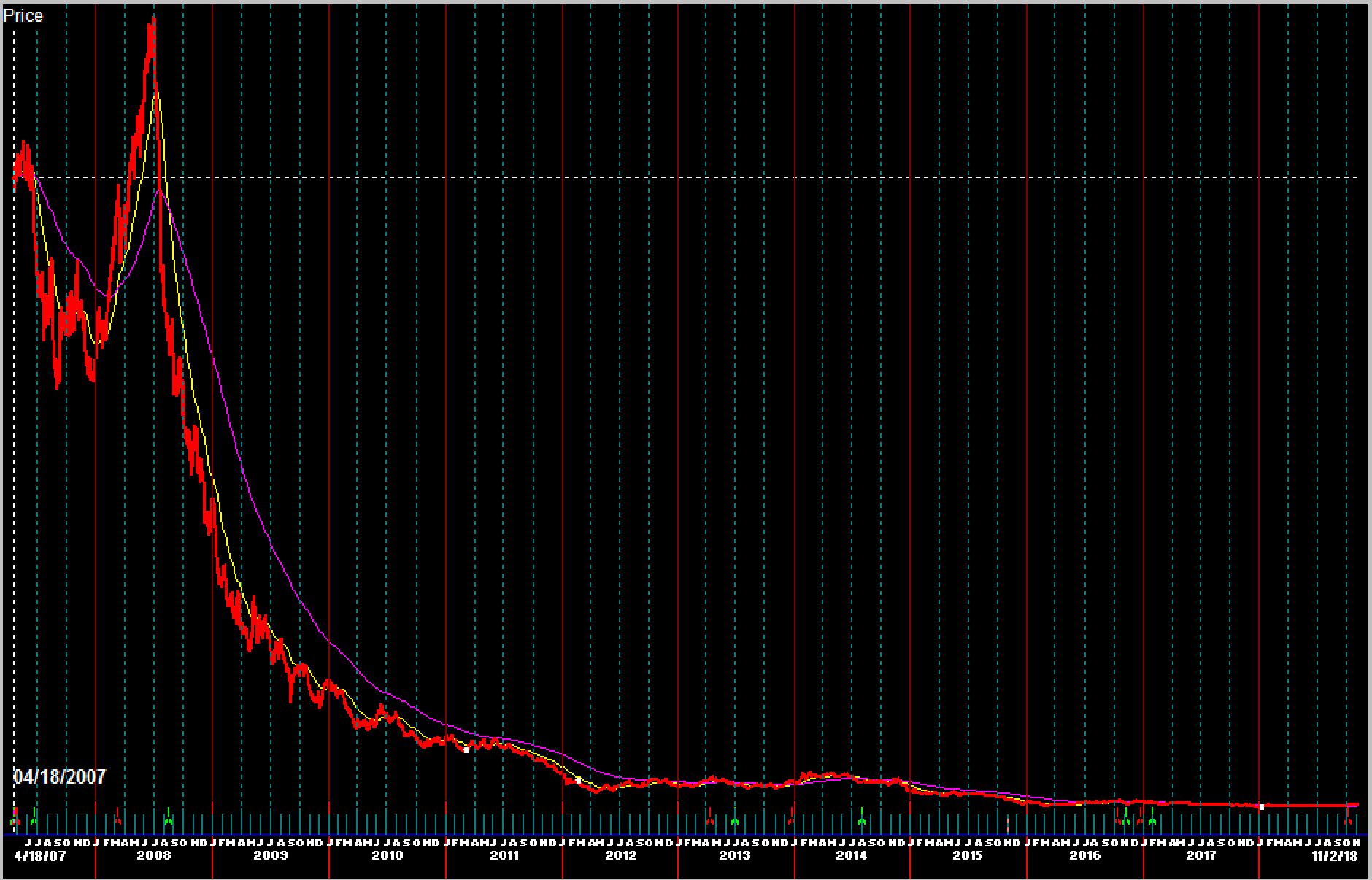 And now a closer look.The price of this ETF just broke out! 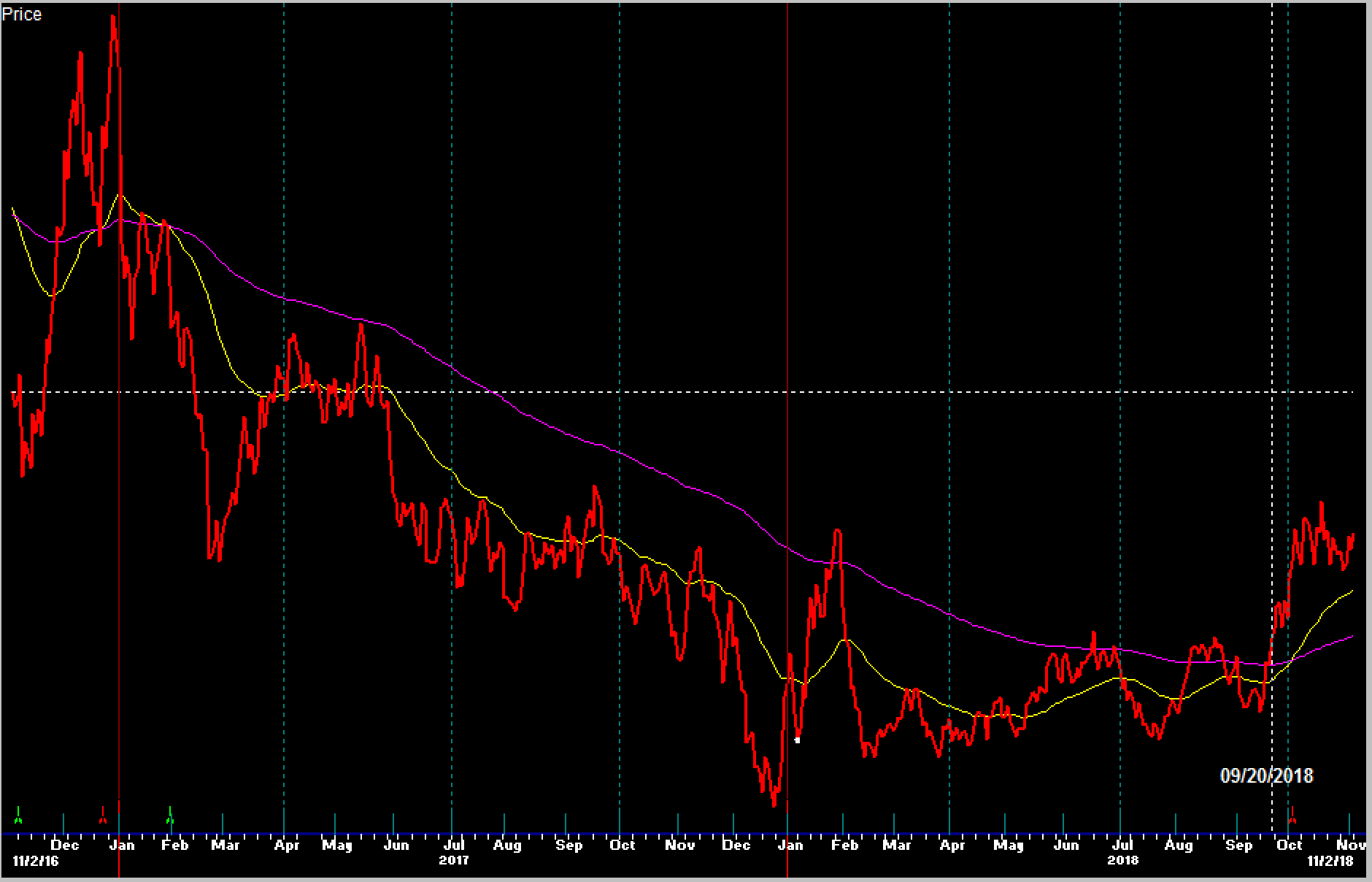 We took an entry level position in a similar fund that doesn’t generate a k-1 in our New Power strategy today.  Other equity strategies will add positions if this move proves persistent as well.

Here’s something we’re also excited about. Bandwidth and 5G.  Let’s admit that our entire country is addicted to the Internet and all that it brings us.  Voice, data, communications, productivity, entertainment, security, etc. We couldn’t live without it now. In fact the common denominator in the massive wave of cloud computing, mobile, social, video, and pending shift to the new 5G network is bandwidth.  We need more of it and those who can provide the best and fastest bandwidth for business and personal use are in a great spot.  We like Fiber optics and these companies are waking from the dead.  We have also recently taken positions in our New Power strategy, in Ciena (CIEN) and Acacia Communications (ACIA) which are the biggest players in Fiber Internet in the US.  Like natural gas, they have been thrown out by investors, forgotten and left for dead. But now they are awake.  Ciena is up 60% YTD and Acacia is 28% YTD.  Both just broke up out of multi year lows. Look them up.

There are more that we find really attractive and exciting now.  But they are not in the same places where investors have been conditioned to look.They are names that you have never heard of.  They are in sectors that are long forgotten.  This is where unconventional investing lives and where we find ourselves choosing to invest for our clients.

Please feel free to check in with us regarding your current non-ASFA investments.  Many portfolios are not in the right place and you might need to make some changes.  The Lighthouse is ON!