Are We Out of the Woods Yet?

That phrase always catches me.  We love the woods here in Colorado – biking, hiking, skiing.  I don’t get it.  Anyway, after a near vertical move of +18% off the Christmas Eve lows, are investors safe to get back in to the market?  Has the environment become more positive and constructive?  Should we expect all time new highs?  Read all about it.

First, let’s back up the tape to the end of 2018, in the midst of total despair when the broad US market had just tagged “bear market” territory with a decline of 20%.  It was a brutal time where there was simply no where to run.  Only 7% of all asset classes posted positive results in 2018.  By comparison, 33% of all asset classes were still positive in the year 2008 when stocks were down over 50%. We have said it a billion times but there are two types of market risk.  One is called systematic risk when correlations between stocks, bonds, commodities and other asset classes remains largely the same (systematic).  Here we see environments where stocks go up, while bonds go down and commodities might do their own thing.  In these environments, a well-diversified portfolio will do just fine in terms of generating reasonable results with limited volatility.

The other is called Unsystematic risk.  This is where human behavior comes into play, correlations spike across asset classes and the only thing that matters is how much you have invested versus sitting in cash.  Investors simply panic for any number of reasons and all asset classes begin to move together directionally, in this case, down.  Short sellers dominate during these cycles as they are willing and able to make big money as stock prices fall.  Selling begets more selling and you end up with a market that looks like December.  Unsystematic risk characterizes most bear market environments as emotions alone drive investment decisions rather than reason or logic.  When I said in December that we were in a bear market, I meant it.The magnitude of price declines, broken long term averages, and the very pronounced level of unsystematic behavior among investors, all told the same story.

But here’s the tricky part.  We tend to associate unsystematic behavior with falling prices and highly correlated moves down across multiple asset classes.  What you should recognize is that the rising market today still appears to be governed by unsystematic risk.  Since the lows in December, all asset classes are up including stocks, bonds, commodities, real estate, gold, master limited partnerships, internationals, pot stocks and yes even Bitcoin got a little lift (after falling 90%).Prices have moved up for nearly eight consecutive weeks challenging even the most diehard of bears and their convictions.  The key driver here seems to be one thing – Fear of missing out.   I hate to be the party pooper, but that’s not good folks.  Until we see asset class deviations in their price movements that angle back to more traditional non-correlation with each, we’re still in the camp that the market is carving out a long-term top that will ultimately yield to a more lasting and damaging bear.  Please understand, that topping cycles can be long and highly deceptive including marginal new highs and very convincing rebound rallies like the one we are seeing now.

The Character of this Rally

On the surface, this rally has been impressive.In fact, the price appreciation from the lows in December is just as impressive as the declines that preceded it bringing us back to the same price and time point of the market failure last November (right at 2780 on the S&P 500).  Internally, we are seeing those who held massive short positions against the market get “squeezed” out daily driving prices even higher.  We have seen the Advance Decline line poke out to an all time high and breadth measures go from one of the deepest oversold conditions ever to one of the most extreme overbought conditions ever all within 45 days.But what we have not seen are some critical elements that would suggest this rally is more than an absurd rebound with a larger topping cycle (aka bear market).  Specifically, we have seen only 14 of 24 industry groups (58%) move back above their long term 200 day moving average.  The same thing happened in 2015 when prices rebounded all the way back to the very top only to see another massive failure and retracement back to the lows and beyond.  After eight weeks of rising prices, we have only seen 58% of industry groups move back into bullish trend mode.

We have also said that there are only two things that drive prices higher sustainably; Liquidity and investor sentiment.According to Bloomberg, as of the second week in February 2019, investors have pulled out $41 Billion from US equities even as prices continue higher.  Bullish sentiment is there, of course, and has in fact reached nose bleed levels of over confidence among “dumb investors”. 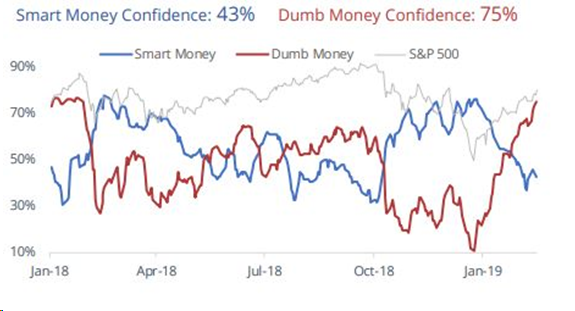 But investors are clearly not putting their money where their mouth is.  They are in fact liquidating assets and redeeming to cash as we move higher and higher.  Volume numbers started very strong in early January, but every up day now is met with lower and lower buy side volume.  When we see investor inflows into equities turn positive and when volume patterns show more consistency with price action, then we’ll be in the bullish camp.  Until then, we’re not expecting this rally to move sustainably higher from here.  In fact, we added short positions to all strategies last week and will hedge further soon if we see selling pressure materialize.

If I had to characterize this rally, I would call it a technical wonder, but not one that has the right guts or ingredients to say that bear market risk has gone away, quite the opposite.  Jason Geopfert of Sentiment Trader models up recession and bear market risk (probability) which he still pegs at nearly 70%. 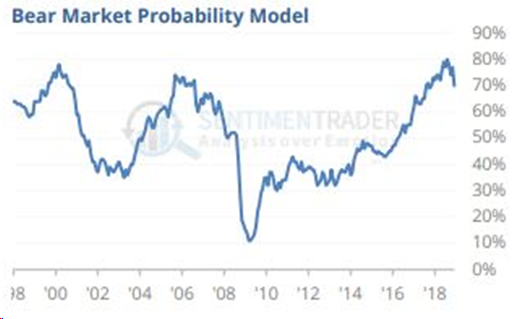 The data could be bad, but I actually find it somewhat consistent with other things which are also showing steep drops recently including:

All in, it seems the Federal Reserve will be right to hold on more interest rate hikes and we expect their next move may be to drop rates, maybe this summer if recessionary pressures continue to rise.

And the stock market is up 10% YTD?  Seems like a great place and time to take profits and hunker down.