The final moves up in the broad US stock market last week brought all the bells and whistles of a near perfect technical push out to new highs. Ten years ago, exactly (10/10/2007), we saw the same thing happen. It was the last day of the bull market and the S&P 500 went on to lose -56% through March of 2009. This is not meant to scare but simply to remind all that markets can and will do what they want, when they want for seemingly little or no reason. Today, we have conditions that are not unlike other bull market peaks. We have spoken to this reality many times this year. For this update, we’ll add a few more grains of sand to that pile of evidence.

Blow Out in Investor Sentiment

Sentiment surveys are contrarian in nature. While we know that this indicator is contextual and less of an exact trading tool, it is meaningful. As of last week, our sentiment indicators showed that bullishness is finally back while bearishness has taken a back seat. The spread between the two is not yet at the extreme where we tend to see immediate intermediate term tops but it is now in the danger zone from the perspective of our model criteria. As such, as of the end of last week, our Net Exposure model lost 2 points (from a positive 6 to a positive 4). Any positive reading suggests we remain fully invested but the deterioration in our model while prices made a new high is noteworthy. When everyone is bullish and has burned their fuel in the form of buying this or that, there isn’t much thrust left to take prices higher. So for now, we’re adding back a bit of concern regarding the potential for at least a short-term correction in stock prices.

Debt Getting Out of Hand Again

As investors and consumers feel more comfortable with their financial situations, they tend to take on more and more debt. It’s just a human defect that we can’t say no to more buying power (and buying more stuff) as we feel financially strong. It’s called a wealth effect when a rising stock market creates a feeling that we can afford to buy more, borrow more, take more chances.  Some of these gauges of personal debt have been accumulating for a while but others are just starting to accelerate now. We’ll give you a few examples, provided by InvesTech in their recent bulletin. 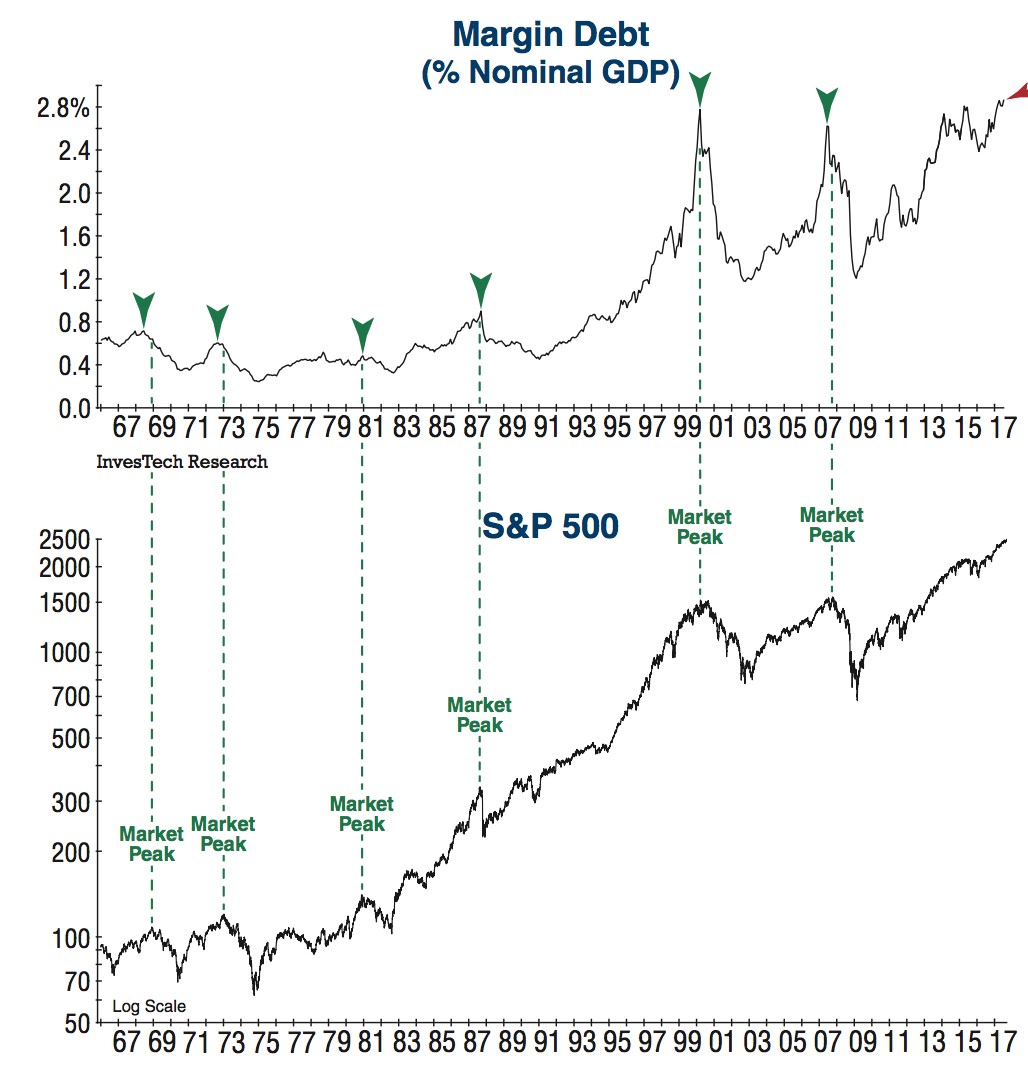 Of course, debt is not solely the domain of the common households but also of global governments (US, Japan, and Europe mostly) which now owe a collective $15 Trillion. The ECB seems to be working to round up all of their collective debt. Why? Are they planning some sort of restructuring? That wouldn’t surprise us in the least.

Puerto Rico’s debt is going to zero as they actually (or perceptively) default on their general obligation bonds. Puerto Rico is almost a micro version of the US in aggregate. They also ran up huge debt, they failed to manage aging utility infrastructure for years and failed to create a diverse and resilient local economy as nearly 1/3 of their greying population has moved away. The recent hurricanes just pushed them over the edge perhaps a little faster than what was inevitable. It is sobering to hear what has become of this non-state piece of our country and our hearts go out to the people who are in the dark, without power, water or electricity. Puerto Rico should also serve as an example of what any state in our country might expect if they fall on hard times in the way of Federal support. Very little! We’re on our own folks, that much is clear.

Ok so what if debt is out of hand across the board?

Practically, all investors must then understand sensitivity to rising interest rates, aka borrowing costs. Some say that rising interest rates don’t matter much from this historically low level. Based on the above, I would argue the opposite. With so much debt accumulated, any change in rates, which shows up as rising costs, will have real and immediate effects on daily cash flow, ability to repay, and solvency. It’s a hurricane to those who must pay on their debt.

We can’t say how this will play out in detail, as we’ve never been in a debt situation like this before. We’ve seen what default looks like with corporate debt and household debt but could developed countries default on their debt? The Federal Reserve is working hard to talk us through reducing their balance sheet starting this month (code word for selling mortgage-backed securities at $10 Billion/ month). Yellen promises it will be like watching paint dry. Hmmmmm

Market Trends are Too Good

While I love to see all the strength in stock prices and positive technical support, I do have that nervous knot in my belly when things seem just too good. Investors are being drawn into stocks, from virtually everywhere else including bonds, cash, commodities, housing, etc. This is the great sucking sound that happens near all major peaks and it has begun. Statistically, we haven’t yet seen the huge inflows into equities that tend to accompany the final price peaks but I’ll bet that is in the works now. These are the melt up environments combined with very high bullishness that leads to huge inflows into equities, right into the final highs. I’m having a de ja vu moment with years like 1999 or 2007. In fact, Bespoke just reported that the gains in the last five years are nearly the same as those leading into the final peak in 2007 (100%), ten years ago today. Again, this is not a prediction, but rather an awareness to check your expectations. 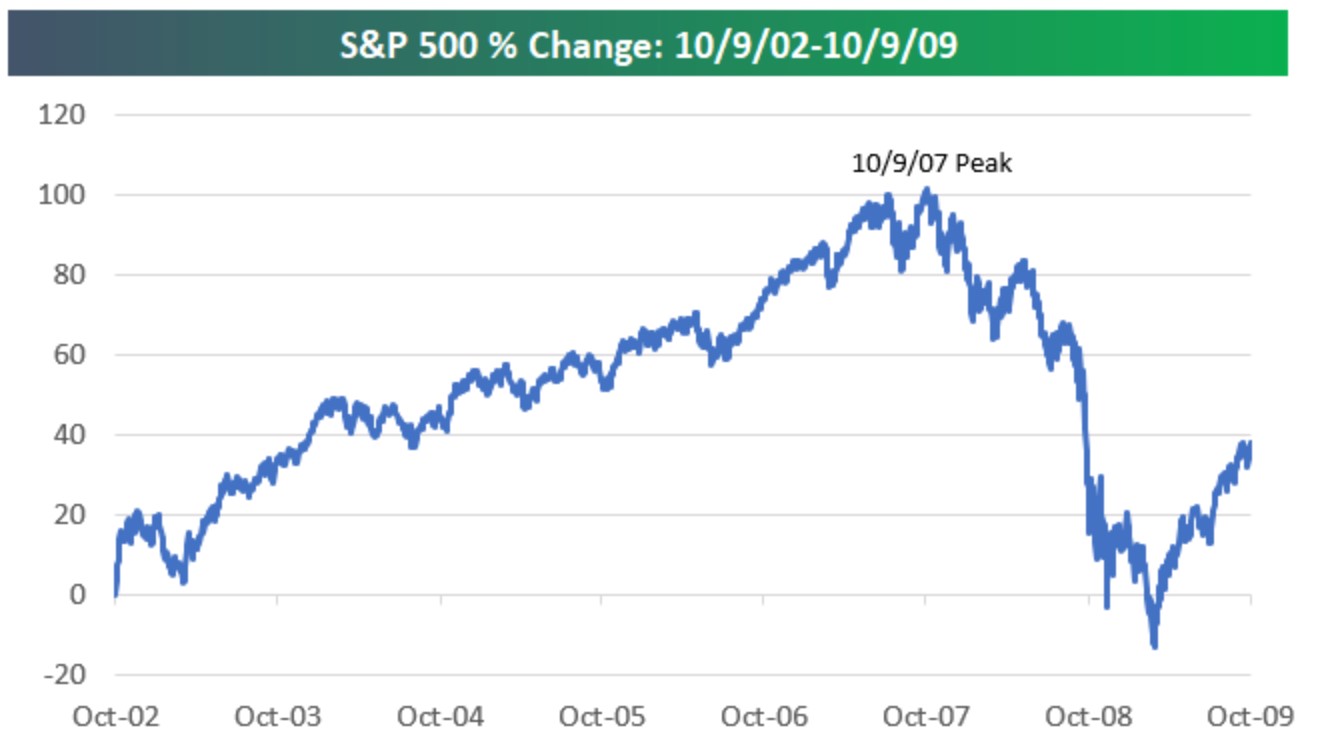 All said and done, trends and market momentum are all still very strong today. No signs of weakness, literally. These issues are not by themselves the root cause of a pending or immediate bear market but rather signs of an aging bull market and an aging economic recovery. So, while we remain almost fully invested and making money weekly along with the markets, our level of skepticism is also on the rise. It is our nature to get uncomfortable when consensus lies in overconfidence.

As I said clearly in the piece on the 3rd Great Investment Opportunity,

“If you do not have a robust risk management system or process in place, you need to find someone who does before you are raking leaves”.

There are a lot of leaves in my lawn.

It was great to see so many of our clients at our first annual client appreciate night. Some loved the illusionist; some couldn’t stand it very long. I’m not sure I’ve decided myself but it got me thinking along with our theme of “All is Not As It Seems”. We’d love your feedback if you were willing. Please send us an email with your thoughts.